Pat Robertson: 'The Homosexuals' Are Using An 'Organized Thrust' To 'Stick It To Christians' - VIDEO - Towleroad Gay News 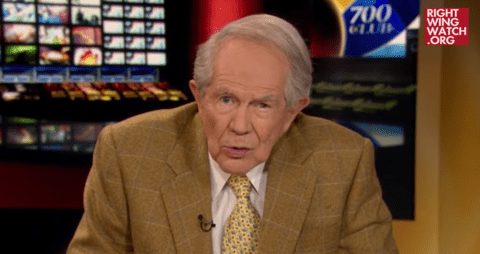 Hoary old bigot Pat Robertson has said that “the homosexuals” are using an “organized thrust” to persecute god-abiding Christians into doing their taxpayer-funded jobs.

RELATED: God Is Selling His NASDAQ Shares Because of Gay Marriage

He continued that gay people are no longer happy to be “left alone” – they now want to “come out and stick it to the Christians.”

“That is absolute tyranny,” he concluded “and it’s high time we call it what it is and we stand up for freedom.”

Robertson recently said that gay people are on a mission to jail anyone who does not agree with them.