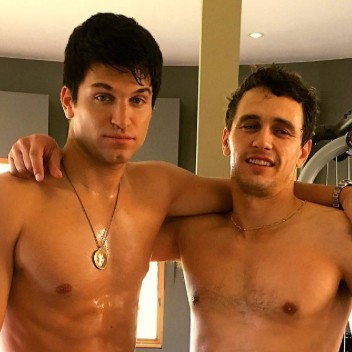 James Franco shared a revealing snap on Instagram showing him alongside actor Keegan Allen, both of whom are clad in Nasty Pig apparel.

While we had heard Franco would produce the film it now appears, based on these snaps, that Franco will also act in the film.

Perhaps Franco will play one of the two gay murderers at the heart of the story? The real life murders that inspired the story were carried out by Raymond Cuadra, 25, and Joseph Manuel Kerekes, 33, in what police called a “misguided attempt to make it big” and lure producer Kocis’ big star (Brent Corrigan, né Sean Lockhart) away from Kocis.

Justin Kelly will direct King Cobra following his feature length film debut I Am Michael, which Franco also starred in.

Check out one more pic shared by Keegan from the set below: