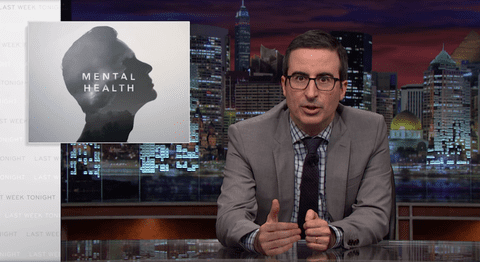 On Sunday’s Last Week Tonight, host John Oliver tackled head on the problem of mental healthcare in the U.S.

Oliver pointed out that “mental health” is an issue trotted out by conservative politicians in the aftermath of a mass shooting, such as the Umpqua Community College shooting that took place last week, to steer the national conversation away from gun control. In doing so, those politicians paint the mentally ill as perpetrators of violence when in fact, research suggests the mentally ill are more often than not the victims in such situations.

Another devastating statistic? The U.S. prison system is the country’s largest provider of mental health treatment, which, as Oliver says, it a little bit like “finding out Lil’ Wayne lyrics are our greatest source of sexual education.” Oliver went on to call the mental health system, a “frustrating cluster-dry hump of some kind.”