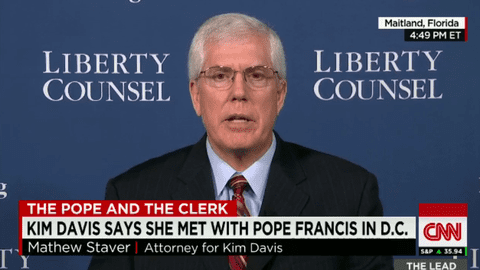 On Wednesday a senior Vatican official confirmed that the Pope had med with Davis after first refusing to confirm or deny the meeting took place.

RELATED: Lawrence O’Donnell Digs Into Who Set Up the Secret Meeting Between Kim Davis and the Pope: VIDEO

Pressed by Tapper as to who arranged the meeting, Staver kept mum:

“I won’t go into details in terms of how it came about. There’s a lot of speculation as to how it came about and how did she get in and out without being seen by the media that was surrounding the Vatican embassy. I will say that the bigger issue is not how or how it happened, is that it did happen.”

Previous Post: « Boxers or Briefs? The Men of Santa Monica Drop Their Shorts and Spill – WATCH
Next Post: Watch This Hunky Connecticut Cop Bust a Move in Epic Dance-Off: VIDEO »