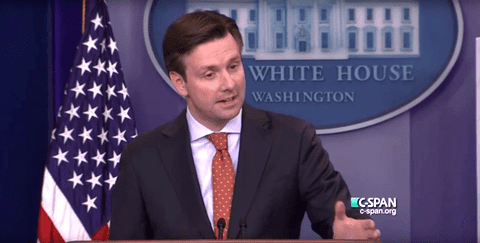 The bill introduced earlier this year would amend the Civil Rights Act of 1964 to include protections that ban discrimination on the basis of sexual orientation, gender identity, and sex in the areas of employment, housing, public accommodations, public education, federal funding, credit, and the jury system.

“I’m not prepared to say that yet,” Earnest said. “This is a piece of legislation that the White House does continue to review. There’s significant consequences to this bill going into effect. It has an impact on housing law and a variety of other policies in the federal government, so it’s something that’s still being carefully reviewed by the administration.”

But Earnest said even without explicit support for the bill, Obama believes “we must ensure all Americans are treated equally under federal law” and is still behind the idea of enshrining comprehensive non-discrimination protections for LGBT people.

“The president believes the passage of comprehensive legislation that protects LGBT Americans from discrimination would mark an important step toward that outcome,” Earnest added. “So, we would applaud the efforts of members of Congress to try to advance that goal, but when it comes to this specific piece of legislation, it’s something that is still under review by the administration.”

Asked if the vice president was out of step with the administration when he said Congress “must pass” the Equality Act during his speech at the 19th annual Human Rights Campaign dinner on Saturday, Earnest downplayed the notion of a split between Biden and Obama on the issue.

“I think the vice president was certainly expressing a set of values and views that are consistent with the policies of the administration, but as it relates to the administration’s review of this particular piece of legislation, that’s still ongoing,” Earnest said.

Watch Johnson ask Earnest about the bill in today’s press briefing, below: