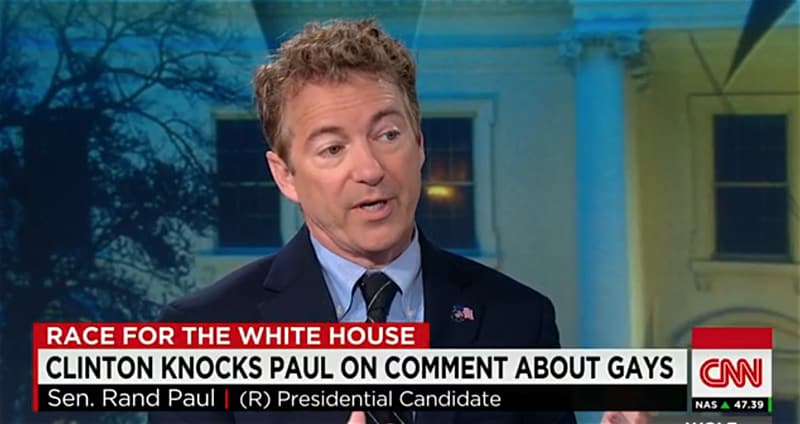 Rand Paul attempted to clarify his remarks suggesting that employers should be able to fire people for being gay.

Said Paul at a campaign event broadcast on Periscope on Wednesday:

“I think really the things you do in your house we could just leave those things in your house and they wouldn’t have to be part of the workplace to tell you the truth. These are very difficult decisions on what you decide will be employer’s decisions and not. And really isn’t so much about that question as it is about—it sets up a classification, or a class of people who can now sue. See what I mean? So what happens, it sets up a whole industry for people who want to sue….If you are gay there are plenty of places that will hire you.”

The remark prompted a reaction tweet from Hillary Clinton:

The feeling when a GOP candidate says it's acceptable to be fired for being gay. https://t.co/cF9mw5k8fq pic.twitter.com/cYFvcW27mQ

Paul spoke with Wolf Blitzer on Thursday and attempted to wade out of the morass with a fancy word salad:

Previous Post: « The OXD Mirror: The Legacy of Space Disco
Next Post: 800,000 People Came Out as LGBT This Year on Facebook, and the Rates are Increasing »