We’re turning to a non-fiction piece for today’s installment of TowleREAD–our audio book series currently focusing on the best new and classic LGBT books available on Audible.com–and looking at a biography of the iconic Alan Turing.

Credited as the father of the modern computer and for helping the allies win World War II by breaking the Nazis’ seemingly uncrackable enigma code, Alan Turing met an untimely end after being convicted of gross indecency in 1952 for having a homosexual relationship. Ordered to endure a cruel course of hormone therapy to reduce his libido, Turing would ultimately take his own life by eating an apple laced with cyanide in 1954.

In his groundbreaking 1983 biography of Turing titled, Alan Turing: The Enigma, mathematician and gay rights activist Alan Hodges explained in simple, digestible terms just how significant Alan Turing’s contributions were to the field of computer science and how his sexuality became grounds for his persecution.

Named by The Guardian as one of the 50 essential books of all time, Hodges’ biography brought together the significance of Turing’s work in computer science, code-breaking and artificial intelligence, with the significance of his having been a gay man whose extensive contributions to society and culture were irrelevant in the eyes of a bigoted government that attacked him for his sexuality and was ultimately complicit in his death. Speaking with the blog The Laughing Mathematician of how he stumbled upon Turing’s two legacies, Hodges said,

“In 1969 I was a Cambridge undergraduate and at that time his name wasn’t well known to most undergraduates. I read a lot of maths that was not on the syllabus and I discovered his work on Turing machines. So his name at least meant something to me at that time and I was very surprised during 1972-73 when his name came up in quite a different way. I met many people in the Gay Liberation movement who had actually known him…He was by no means a household name [in the world of gay activism]. It was simply coincidence of meeting the older generations and having seen his name before. Very few people knew of this connection to Turing. Of course, it is well known now, but at the time it was something no one wanted to talk about.” 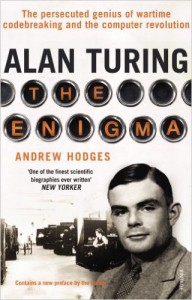 Hodges’ work also played a crucial role in bringing about the British Government’s posthumous pardon of Turing issued in 2013. Michael Saler, Professor of History at University of California, Davis points out that Hodges’s “superb biography” also shows how Turing’s homosexuality was at the crux of his contributions to the world of science:

“[Hodges] empathetically explored the centrality of Turing’s sexual identity to his thought and life in a persuasive rather than reductive way. Thus he made a convincing case that Turing’s teenage crush on a fellow schoolboy, Christopher Morcom, was an important catalyst for his lifelong preoccupation with the relationship between brain and mind. Morcom’s unexpected death at the age of eighteen was a shattering blow to Turing, who began to reflect on whether his friend’s consciousness might survive after death or whether it was simply a result of complex material processes and expired when life did. Hodges also linked the famous “Turing Test”, in which a computer attempts to pass as an intelligent human being, to Turing’s own dilemma as a gay man in a homophobic world. (Turing called his test the “imitation game”, and Hodges observed, “like any homosexual man, he was living an imitation game, not in the sense of conscious play acting, but by being accepted as a person that he was not”.)”

Hodges’s biography of Turing has inspired great works of art about Turing’s life, including Hugh Whitemore’s 1986 play Breaking the Code and the 2014 Oscar-winning The Imitation Game starring Benedict Cumberbatch and Keira Knightley.

As part of its sponsorship of TowleREAD, Audible is offering a free download of Andrew Hodges’s Alan Turing: The Enigma at Audible.com with a 30-day trial membership for Towleroad readers.