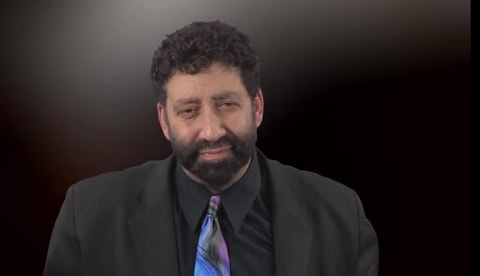 With barely an original bone in his body, anti-gay end-times Rabbi Jonathan Cahn has once again suggested that the recent terrorist attacks in Paris are the result of support for same-sex marriage.

Speaking to televangelist Jim Bakker on Monday, Cahn said the terrorist attacks are a “second harbinger” of god’s judgement and god will continue to punish countries that support gay marriage.

He added that a new wave of terrorism could come to the U.S. because of support for same-sex marriage “in a way that is greater than the first.”

Watch Cahn predict end-times prior to the legalization of same-sex marriage in America below.

Previous Post: « Gay Boxer Yusaf Mack Says He Wants to Date ‘Trannies’ – VIDEO
Next Post: This Video of Adele’s ‘Hello’ Imagined as a Lesbian Romance Will Break Your Heart: WATCH »