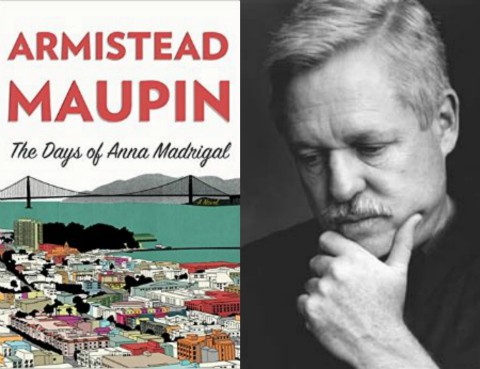 Today’s TowleREAD pick comes from author Armistead Maupin and his most recent book, The Days of Anna Madrigal. Published in 2014, Anna Madrigal is the ninth and final installment in his magnum opus, The Tales of the City series. What began as a San Francisco newspaper serial in 1978 expanded into one of the most beloved LGBT book series whose installments have spanned four decades.

The Days of Anna Madrigal focuses on the central figure of The Tales of the City (adapted into a TV series in 1993), the loving and beloved transgender landlady of 28 Barbary Lane, whose name you probably guessed is Anna Madrigal. Now 92, Anna remembers her youth at the Blue Moon Ranch (a whorehouse n Nevada run by her mother) where she was raised as a boy named Andy. She ultimately returns to the Blue Moon to confront some unfinished business from her past before going on with a member of her bohemian San Francisco tribe to Burning Man.

Maupin spoke with San Francisco Weekly about why he decided to focus this last chapter on Mrs. Madrigal:

It just felt right to me. Anna has always been the heart and soul of Tales of the City and as she reaches the point where she wants to “leave like a lady”, as she puts it, I felt that the series should conclude at the same time. To be truthful with you, I have a bit of trepidation trying to drum up new youthful characters and make them realistic. My work has always been about what I know to be true and I can write about these older characters because they are in their 60s as well as the much older character, Anna, But I didn’t want to have that inauthenticity come into my work. I’m ready to try something different.

Maupin added that ending with Mrs. Madrigal seemed to complete the arc of the Tales of the City series:

There is a story arc here and it is finally completed on the last page of The Days of Anna Madrigal with the final sentence: “There was a city waiting for her.” It’s an echo of Mary Ann first arriving into town and it’s the essence for all of us who move to San Francisco with some dream in our hearts.

If you’re new to Tales of the City, however, Maupin advises you start from the beginning:

It’s a journey and I think you should start at the beginning if you’re going to read them. You will know things that you don’t want to know if you read Anna Madrigal, On the other hand it might be interesting to go back to see how certain people start. Either way, there’s always something to take away from Mrs. Madrigal and the residents of 28 Barbary Lane.

It’s easy to forget how revolutionary Maupin’s work was when it was first serialized in 1978 and later printed in book form. Maupin often recounts a story about how his editor at The San Francisco Chronicle kept tabs on the number of homosexual and heterosexual characters in his work to make “sure that the gay characters didn’t overtake the straight characters and thereby undermine civilization.” One need only imagine that actual chart in that editor’s office with one column marked “heterosexual” and one marked “homosexual” to understand how Tales of the City broke barriers.

Today, the books have withstood the test of time even as they encapsulated the moments in which they were written. The series remains an enduring favorite to its initiates and brings more devotees into the fold each year. With The Days of Anna Madrigal, The Tales series may come to an end, but its impact on readers certainly won’t. It is the impact on people once cast to the fringes of society that Maupin says he is proudest of: “I know that the most important thing I’ve done is bring the gay experience to the world at large, I know that and I’m proud of it.”

As part of its sponsorship of TowleREAD, Audible is offering a free download of Armistead Maupin’s The Days of Anna Madrigal at Audible.com with a 30-day trial membership for Towleroad readers.

Listen to Maupin read an excerpt from the book, below:

(Photo of Maupin by Michael Amsler)