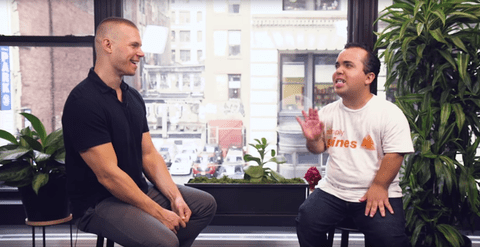 In the latest installment of the series, Juzwiak interviews a gay little person, Joe Navedo, about getting laid, fitting in, and what it was like to grow up gay and little.

Writing in a companion piece accompanying the video, Juzwiak brings up the issue of objectification and what role–potentially detrimental–it could play in Navedo’s sex life. Juzwiak writes,

In a superficial, no-strings-attached sex scenario, objectification is the name of the game. You use what you’ve got to get what you want. In the gay world, there isn’t just somebody for everybody; there are multiple potential partners for whatever type you inhabit.

Navedo, 30 and Puerto Rican, told me that he often surprises people with the amount of dick he gets. He shared a story about meeting a guy out one night on Fire Island and bringing him around his friend group the next day. Half of Navedo’s friends assumed the guy was a rent boy. “‘How rude,’ I thought,” Navedo recalled.

As for how he sees himself, Navedo told Juzwiak, “Sometimes I forget I’m a little person”:

“I don’t see myself as having an issue with my height,” said Navedo, who is 4’4”. “I’ve never come to a blockage where my height is an issue in a relationship. Someone told me one day, ‘You literally walk around and you come across like you’re 6’2”.’ It’s true. It’s sad. I’m supposed to acknowledge who I am, but I don’t really see it. People think I must have an issue or it must be hard.”

Of coming out, Navedo says,

“I never had to tell anybody I was gay,” he recalled. “I just lived my life out loud. I wasn’t being dramatic, I would live my life. If you asked me, I would tell you, but I never had to announce it. That’s what gave me the self-esteem I have now.”

Navedo also told Juzwiak that he feels he has more in common with gay men as a community than with little people.

When it comes to dating, Navedo says that his career in nightlife has proved more of a hindrance than his height: “When someone doesn’t understand nightlife, and just sees pictures, his mind gets cluttered,” he said of potential mates.

Watch Juzwiak’s interview, below. You can read his full interview with Navedo along with another gay little person, David Funes, here.

Previous Post: « Brandon Skeie May Be the Cutest Singer Yet to Cover Adele’s ‘Hello’ – VIDEO
Next Post: NY Governor Andrew Cuomo to Seek Additional $200M in HIV and AIDS Funding »