You are here: Home / Gay Duke Freshman Threatened With Death Speaks Out About LGBT Oppression 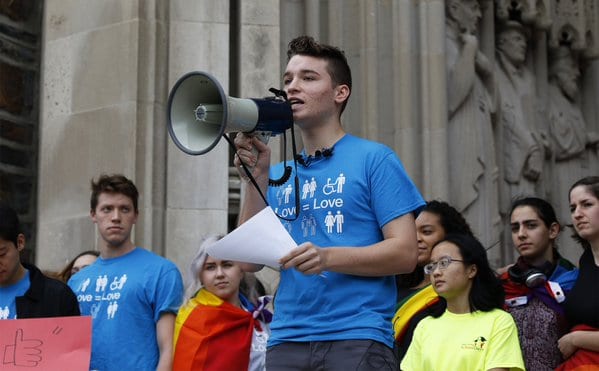 Gay Duke University freshman Jack Donohue is speaking out after his life was threatened by homophobic vandals who scrawled anti-gay graffiti in his dorm that read, “Death to all fags, @Jack.”

In an interview with The Washington Post, Donohue says he found out about the graffiti (pictured below, right) from his roommate while in class. “My first reaction was total disbelief and confusion,” Donohue says. “I simply closed my laptop and finished class, as I wasn’t prepared to process something that outlandish and odd.” 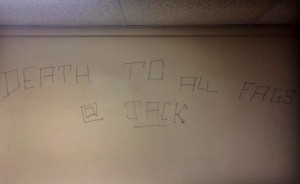 Donohue later spoke at a rally on campus about being targeted. He says his message was to “not allow this incident to be viewed as an outlier but rather a physical manifestation of prejudice and oppression that queer bodies experience daily.” He added:

“I also wanted people to understand that these macro aggressions only exist because of micro aggressions that are done daily and commonly on campus. Lastly, I stressed that the average cisgender straight person is the issue, as very few “allies” are truly active allies.”

While Duke University police are still investigating the crime, Donohue says he does not think that “anyone will be found culpable.” He also says he does not know “who might have done it.” But Donohue’s focus is less on the individual perpetrators than the systemic oppression LGBT students face:

“What I mean by that [statement] is that hatred exists. Hateful people exist. Violence exists. We cannot change those things. What we can hopefully change is the general attitude toward and treatment of queer people. One bigot need not be the focus of this incident.”

Going further, he argues that college campuses, including Duke’s, are not inherently safe spaces for LGBT people:

“There are many college-specific institutions that frequently and systematically make queer students feel unsafe such as Greek life, hook-up cultures, lack of queer faculty, and lack of administrative response and protection.”

As for what Duke University can do to improve the lives of LGBT students, Donohue points to a list of demands that he and the Blue Devils United (an LGBT student advocacy group on campus) put forward, including “a zero tolerance hate speech policy, sexuality major, and establishment of a committee to review the historical targeting and expulsion of gay students.” Donohue also stressed that the burden of action falls primarily to the school’s staff: “The burden to relieve oppression is on the oppressor, not the oppressed.”