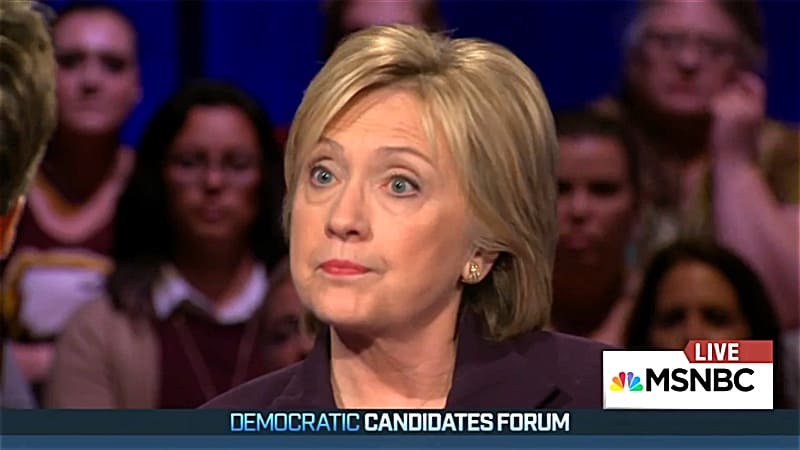 At last night’s First in the South Democratic Candidates Forum, Rachel Maddow asked Clinton about the criticism her remarks about the Defense of Marriage Act (DOMA) have received since their interview on October 23. Watch BELOW.

Clinton told Maddow in last night’s forum that the conversations about such an amendment were private, and then moved on quickly.

“Well, certainly, in thinking back on it, those were private conversations that people did have. And I am more than willing to say, again, that was something that came up in private discussions that I had. The important thing is: DOMA is gone.”

Maddow clarified: “The worry about a constitutional amendment was being discussed privately, if not publicly.”

“And look what happened under the George W. Bush Administration when it was Karl Rove’s strategy to put constitutional amendments on state ballots, which all but a few passed. It was one of the reasons, I think, that the Kerry campaign had some challenges in 2004. This was a very real problem that people were concerned about. And you know if I’m wrong about the public debate, I obviously take responsibility for that. But I think the important thing is that we are now beyond that. My husband has certainly said, and I agree with what he said, that now, thankfully, we have moved to a stage where marriage equality is the law of the land. What we haven’t yet done is to deal with the discrimination that still exists, and try to figure out how you can help people who can now legally get married on Saturday and then get fired on Monday. And that’s the next big challenge.”

Discussion then moved to the Houston Equal Rights Ordinan

Asked Maddow: “Houston is now the largest city in the country that has no discrimination ordinance…If the progressive movement can’t build and hold that kind of a basic civil rights protection in a city like Houston, is there something wrong?”

“Well, Rachel, look at what happened. Because you’re right, this ordinance is similar to ordinances in cities across America, including in other cities in Texas, right? But what the far right did, very successfully, is really engender a lot of fear and a lot of anxiety, and create this backlash against this ordinance. And they used the bathroom issue. And yet, you could go to another city in Texas, like San Antonio, and you would know that that was totally without merit, that there was no basis for it…I think this is a reminder that if you stand for equal rights, if you stand against discrimination, you don’t just do it once and you’re done. You’ve got to keep fighting for it, and you’ve got to keep standing up for it, you’ve got to keep moving forward.”