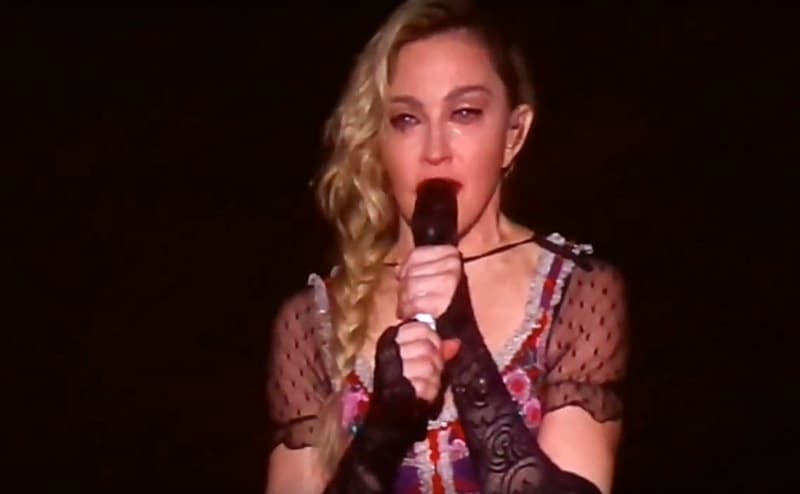 On her Rebel Tour Saturday night at the Globe Arenas in Stockholm, Sweden, Madonna put her guitar down and offered a tearful, touching, and powerful tribute to Paris and condemned the terrorists who brutally took lives on Friday night.

“This whole show is about celebrating life. And standing up for your rights. Fighting for what you believe in. It’s been very hard for me to get through this show and not forget about what happened last night. So I need to take this moment to acknowledge the tragedy. The tragic killings, assassinations and the senseless ending of precious life that occurred last night in Paris In many ways, I feel torn. Like why am I up here dancing and having fun when people are crying over the loss of their loved ones?”

“However, that is exactly what these people want to do. They want to shut us up. they want to silence us. And we won’t let them….As much [terrrorism] that does occur, there’s more goodness. We are here to claim it.

“I was going to cancel my show tonight but then I thought to myself, why should I give that to them. Why should I allow them to stop me, to stop us, from enjoying freedom? All of the places that people were killed were places that people were having fun – were enjoying themselves, eating in restaurants, dancing, singing, watching a soccer match. These are freedoms that we take for granted of course, and we must not. But they are freedoms that we deserve!

“There are people who have a respect for human  life, and there are people that do atrocious, degrading, and unforgivable things to other human beings. But we will never ever ever change this world we live in, if we do not change ourselves, if we do not change the way we treat one another on a daily basis…in the simplest ways. we must start treating every human being with dignity and respect.”

RELATED: More Than 120 Killed in Coordinated Terrorist Attacks in Paris

Madonna led the crowd in a long moment of silence. Upon resuming the concert, she asked the crowd to join her in singing “Like a Prayer”.