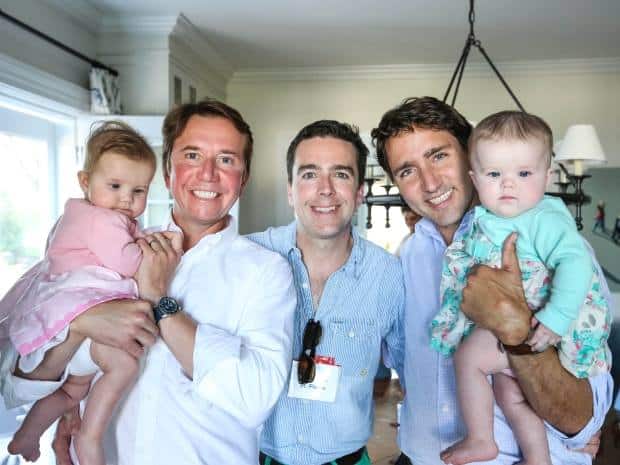 Newly elected Canadian Prime Minister Justin Trudeau has piqued the internet’s interest once again, this time by posing with two gay dads and their twins for a photograph that has been shared over 2,700 times on Facebook since being posted on Sunday morning.

The photo (above) shows Justin Trudeau’s newly appointed president of the Treasury Board, Scott Brison (a member of parliament from Nova Scotia) with his husband, Maxime St-Pierre, and their twin girls, Claire and Rose. The photo was shared by Laurent McCutcheon, an LGBT advocate from Quebec. The caption (in French) reads, “Few countries in the world display such openness.”

If asked why he would pose for such a picture, we imagine Trudeau’s response would be something like this:

Last week Justin Trudeau unveiled a gender-balanced cabinet, the first in Canada’s history.  Trudeau said his aim in creating his cabinet was to “present to Canada a cabinet that looks like Canada.”

Previous Post: « Judge Allows Fayetteville LGBT Protections To Take Effect Despite Arkansas’ Effort To Ban Them
Next Post: Daughter of Two Gay Dads Fires Back at One Million Moms: ‘This Is None of Your Business’ – WATCH »