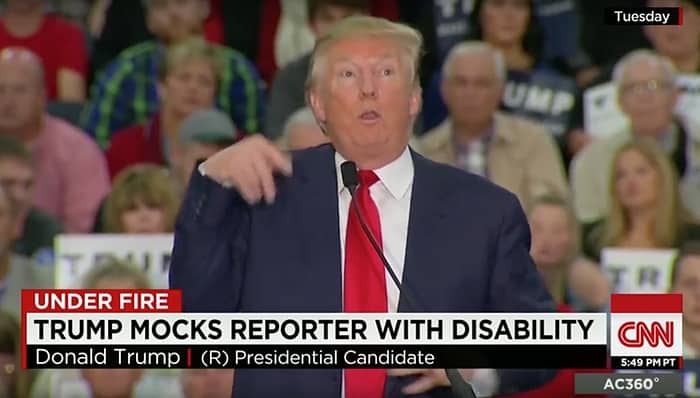 Donald Trump is under fire for mocking disabled New York Times investigative reporter Serge Kovaleski, who suffers from a chronic condition that impairs movement of his arms.

Trump was upset with Kovaleski for calling him out on his lie about seeing thousands of Arabs celebrating in New Jersey when the twin towers came down on 9/11.

In classic Trump fashion, he denies that he mocked Kovaleski and now demands an apology:

In a statement Thursday, Trump adamantly denied that his comments or gestures were meant to mock Kovaleski. He also denied remembering Kovaleski at all — “despite having one of the all-time great memories.”

“Kovaleski must think a lot of himself if he thinks I remember him from decades ago — if I ever met him at all, which I doubt I did,” Trump said. “He should stop using his disability to grandstand and get back to reporting for a paper that is rapidly going down the tubes.”