You are here: Home / Watch a Royal Caribbean Cruise Anchor Destroy a Reef That Took Centuries to Form 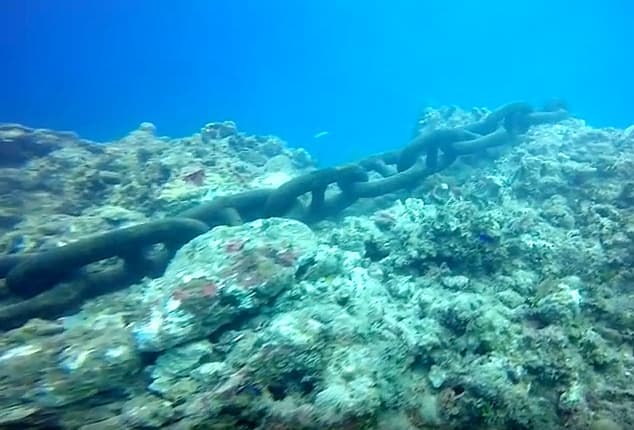 Diver Scott Prodahl posted a video on Tuesday of a heavy anchor chain from a Royal Caribbean cruise ship draped over and destroying a delicate reef off Grand Cayman. The video, which has racked up nearly a million views, will hopefully inspire officials to take a better look at where these ships are allowed to drop anchor.

Another sad day for the reefs of Grand Cayman. Today we noticed that the Pullmantur Zenith (a division of Royal Caribbean Cruise lines) was anchored oddly close to the reef so we decided to go out and have a look…As you will see in the video, a massive portion of the reef out front from Don Fosters and Eden Rock was completely destroyed today. The Department of Environment was contacted but nothing could be done because this was a designated anchorage zone and they were given permission to drop anchor. In the previous several decades this pristine portion of the reef was never needed as an anchorage location but for some reason today, when there was only 4 ships in port, it was deemed necessary. As part of the marine park, we are not allowed to fish here, not allowed to hunt lobsters, you can’t even pick up an empty shell, all in the name of conservation?….but for some reason you can drop an anchor and wipe out a reef that took thousands of years to grow.

This video was shot roughly an hour after the anchor was dropped, I can’t imagine what it looks like now.

A Royal Caribbean spokesperson confirmed the video’s time and location to The Huffington Post but stated that it’s an unprotected area that’s designated for anchorage by the government.

“This is a very unfortunate situation and we will work closely with Grand Cayman authorities to ensure this does not happen again,” Global Corporate Communications Director Cynthia Martinez stated in an email. “Royal Caribbean Cruises Ltd. understands the importance of protecting the marine environment and sustaining the well-being of the places we visit.  Protecting the health and welfare of our oceans is always foremost in our minds.”

Scott Slaybaugh, the Cayman Islands’ Department of Environment deputy director, told HuffPost the area was “seldom used” for anchorage by ships. It therefore contained “remnants of coral reef that we were not aware of,” he said.

“Although this reef was in a distressed state prior to the anchoring, we view any loss of any coral reef as highly regrettable in this age when coral reefs worldwide are in decline,” he stated.