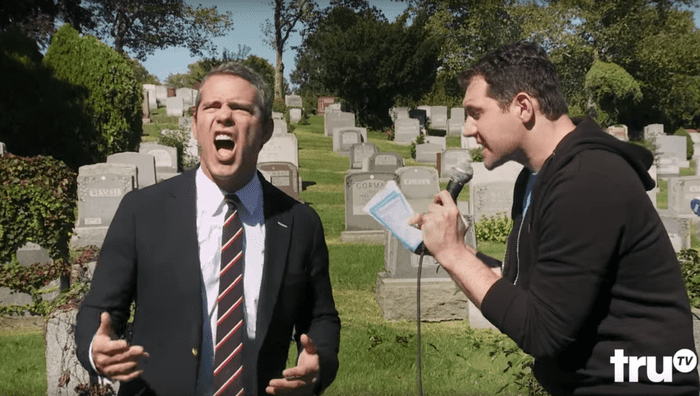 Billy Eichner, aka Billy on the Street, is back with another one of his quiz games, and this time he’s making Bravo!’s Andy Cohen play a game he calls “New Year’s Eve or Deformed.” In it, Cohen has to guess whether the celebrity Eichner mentions is in Frank Marshall’s movie New Year’s Eve (starring everyone) or has a deformity of some sort.

For some reason this latest game is played in a graveyard in Queens. Video of the game includes plenty of random cut-aways to different parts of the cemetery during Eichner’s initial interview of Cohen that, well, just don’t make any sense.

Previous Post: « Ted Cruz to GOP Donors: ‘Fighting Gay Marriage’ Not a ‘Top 3 Priority’ – LISTEN
Next Post: Willam and The ‘Gay of Thrones’ Guy Recap 2015 in Under 5 Minutes – WATCH »