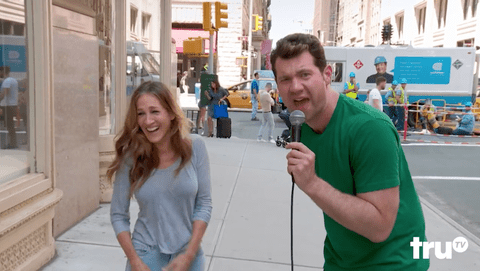 Sarah Jessica Parker was Billy Eichner’s latest guest on his TruTV show Billy on the Street and the two discussed her movie Sex and the City 2 and also played a game of “Santa’s Reindeer or Sex App?”

Eichner told Parker that he had been wanting to discuss the backlash that Sex and the City 2 received from critics and audiences for some time.

Eichner in particular went after those who didn’t think it was “believable” that Carrie Bradshaw and her gal pals would go to the Middle East:

Parker adds, “It did make an enormous amount of cash.” To which Eichner says, “We know you’re very rich! Which doesn’t explain why you’re out there begging people to buy your shoes!”

The pair then play a game where Parker has to guess whether the name Billy says is either one of Santa’s reindeer or a sex app.