Senator Dick Durbin (D-IL) has appealed to Pope Francis to take action regarding homophobic Cardinal Nicolas de Jesus Lopez Rodriguez of the Dominican Republic, who attacked gay U.S. Ambassador Wally Brewster by calling him the “wife to a man” who should “focus on housework” rather than comment on affairs of that country.

The Cardinal has also supported public protests against Brewster. 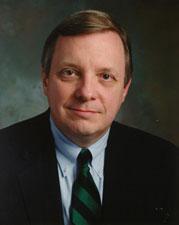 Durbin’s letter to the Pope:

Thank you for your recent visit to Washington and address to our Joint Session of Congress. Your visit and message had a profound impact on all of us.

I write to you about a matter involving Cardinal Nicolas de Jesus Lopez Rodriguez of the Archdiocese of Santo Domingo in the Dominican Republic and the United States Ambassador to that country, Wally Brewster.

In the past the Cardinal and Dominican Church leaders even organized a “Black Monday” public protest against the Ambassador. Their action led to a counter-demonstration in support of the Ambassador and his partner.

Despite these hateful words and personal attacks, Ambassador Brewster has worked to quiet the conflict between Church leaders and himself. His patience and professionalism in light of these mean-spirited attacks by the Cardinal demonstrate his personal commitment to his responsibility of representing the United States of America.

The Church’s teachings on gay marriage are well known but the Church also teaches us to show tolerance for those with different sexual orientations. The intolerant public statements of Cardinal Rodriguez are inconsistent with that clearly stated value.

Since your selection as Pope, you have shared a message of compassion, tolerance, and love. I remember distinctly when you spoke to us at the joint session of Congress in September and reminded us of our responsibility to “defend and preserve the dignity of your fellow citizens in the tireless and demanding pursuit of the common good.”

I accept that challenge and I am calling on you to ask nothing less of the hierarchy of the Church.