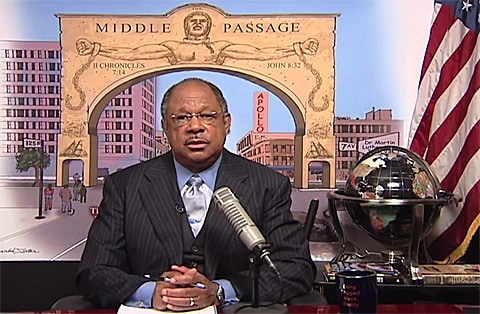 “Stone the Homos” Harlem hate-preacher James Manning has attended a meeting with Donald Trump at which a number of black pastors offered their support to the Presidential hopeful.

Manning is known for posting notorious signs outside the ATLAH World Missionary Church including “Jesus Would Stone Homos” and “all churches and members that support homos cursed be thou with cancer, HIV, syphilis, stroke, and madness.”

Reuters reports that Monday’s meeting was held with the Coalition of African American Ministers, an organization that joined with the likes of Peter LaBarbera and and ex-gay therapist David Pickup to oppose same-sex marriage.

On his YouTube channel, Manning has said that “Trump is the only person running for President that knows Obama is a flat-out communist, socialist, not-born-in-america, unconstitutional.”

Watch Manning rail against the “fags and lesbos running the country” below.