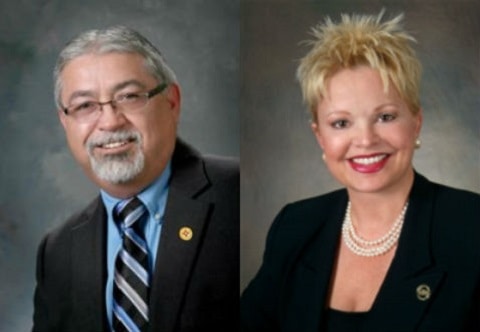 Proposed by Republican reps David Gallegos and Nora Espinoza (above), the law would remove the words “sexual orientation and gender identity” from the state’s Human Rights Act.

The wording argues that the state should not “burden a person’s free exercise of religion by requiring the person to provide a service or to conduct business” in opposition to “sincerely held religious belief.”

Catholics have a strong influence on our secular laws. David Gallegos (R. from NM) feels his religion is first and foremost.

Describing the bill as “blatant discrimination,” Amber Royster, executive director of Equality New Mexico, said the intent is to “make the lives of LGBT people harder.”

Gallegos and Espinoza declined requests for comment from the Albuquerque Journal.

Watch a Young Turks report on a 2014 case in which a company faced a complaint with the New Mexico Human Rights Commission after refusing to photograph a same-sex wedding ceremony.