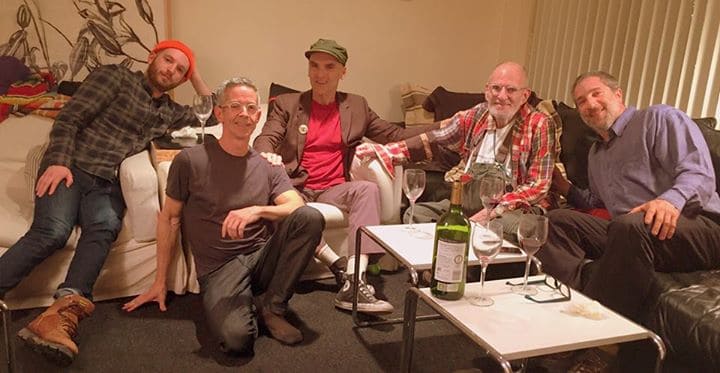 HIV/AIDS activists, among them the originators of ACT UP, gathered in New York City last night. Larry Kramer, Peter Staley, Jim Eigo, Matt Ebert, and James Krellenstein released a joint statement regarding their meeting calling for an end to profiteering by pharmaceutical companies with regard to PrEP (pre-exposure prophylaxis). The statement also says they’ll join with other activists around the country to call for health equity.

A little AIDS history was made last night — a uniting of science and anger to get our juices flowing again for the fight ahead. It felt like old times, with voices raised, gossip shared, wine poured, and love filling the room. We even wrote a statement! For the record, James’s delicious home-cooked meal: butternut squash soup, boeuf bourguignon, mujadara, homemade bread, and chocolate mousse with rasberries and cream. Here’s the statement. PLEASE SHARE WIDELY!

We – AIDS activists, new and old, aged 24 to 80 – have just broken bread in the same apartment where GMHC was formed, coming together for a lively discussion on how to reduce HIV infections among gay men and trans women. Although we may not see eye-to-eye on every issue we debated tonight, we all agree that Pre-Exposure Prophylaxis (PrEP) is highly effective at protecting a person from HIV infection. While PrEP isn’t for everyone, any individual who thinks they are at risk of getting HIV should have easy access to it, without judgement.

We are fed up with Gilead’s abusive pricing of its near monopolies in drugs that treat and prevent HIV. Truvada as PrEP was not their idea, and came to market based on research they didn’t pay for. Gilead’s PrEP profiteering must end. Full access to lifesaving drugs has been a hallmark of our movement, and we will join with AIDS activists across America and around the world to double-down on this push for health equity.

PrEP, along with condoms, TasP (Treatment as Prevention), and better access to healthcare, are now essential public health tools in lowering HIV infections among gay men and trans women. We must use every tool necessary to help them – and to help all those at risk – stop this virus, once and for all.

ACT UP, Fight Back, Fight AIDS.