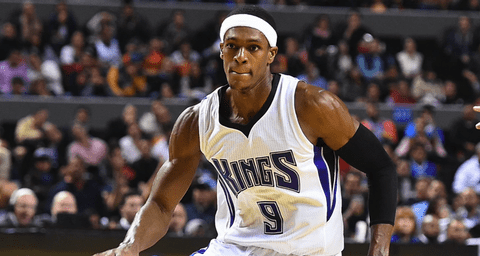 Rondo shouted the gay slur at Kennedy after Kennedy ejected him from the game against the Boston Celtics. As previously reported, Rondo refused to leave the court (as is League protocol) after being ejected and  stalked Kennedy while hurling the epithets his way. The NBA has suspended Rondo after reviewing the incident.

RELATED: NBA Referee Bill Kennedy Comes Out as Gay After Being Called a ‘Motherf–king Faggot’ by Ejected Player: VIDEO

Rondo meanwhile insists that his comments towards Kennedy do not “reflect” his “feelings towards the LGBT community.” He defended his use of the word “faggot” on Twitter by saying his actions were motivated by “frustration and emotion.”

After avoiding the many reporters who awaited him after Kings practice in Sacramento on Monday and leaving team executive Vlade Divac to face the media, he addressed the situation in the worst kind of let’s-get-this-over-with way there is: Twitter.

“My actions during the game were out of frustration and emotion, period!” Rondo wrote. “They absolutely do not reflect my feelings toward the LGBT (Lesbian, Gay, Bisexual and Transgender) community. I did not mean to offend or disrespect anyone.”

My actions during the game were out of frustration and emotion, period!

They absolutely do not reflect my feelings toward the LGBT community. I did not mean to offend or disrespect anyone.

Willam Belli and Perez Hilton were were quick to criticize Rondo’s unwillingness to apologize on Twitter.

@RajonRondo I'm a drag queen who performed Rack City a bunch and had to tell so many people as to what a Rondo was. Bye from a former fan

@RajonRondo You need to learn to express yourself better. Maybe pick up a dictionary and look up some new words.

OutSports’ Cyd Zeigler also weighed in on Rondo’s tweets, taking him to task for attempting to defend his comments by invoking the Twinkie defense of gay slur tirade defenses, “the heat of the moment” defense:

“The heat of the moment” is not a reason, rationalization or excuse for going on a minute-long homophobic tirade against an official.

What makes the Kennedy-Rondo situation so sad is that Rondo likely knew Kennedy was gay and launched at him anyway. According to Samer Kalaf at Deadspin, Kennedy’s sexual orientation was an open secret for years. Having been in the league for a decade, Rondo knew the rumors about Kennedy if he didn’t know the truth in total.

USA Today’s Sam Amick summed up what should be called “the scariest part” of the Kennedy / Rondo incident:

The scary part, the part that sticks with you even more because he chose to not openly and honestly explain himself, is that this is a glimpse of the kind of abuse that has been going on in locker rooms since the beginning of sports. And this incident, let’s not forget, took place in a public forum — with 18,660 in attendance.

As for Rondo’s non-apology, he writes:

But he is missing a chance to heal a wound here, to condemn his own hate speech in a way that might resonate with millions of others and, in the end, produce a positive out of this mess. Everyone is entitled to his privacy, but the far-reaching impact of Rondo’s words in public means this is one time when he simply can’t stay in the shadows. Two tweets weren’t nearly enough.

Watch video of Rondo stalking Kennedy and calling him a “faggot”, below: