HEALTH: Hillary Clinton announces plan to cure Alzheimer’s by 2025: “We owe it to the millions of families who stay up at night worrying about their loved ones afflicted by this terrible disease and facing the hard reality of the long goodbye to make research investments that will prevent, effectively treat and make a cure possible by 2025.”

CHICAGO: Grand Jury declines to indict anyone in death of Sandra Bland: “Many activists have called for charges against Brian Encinia, the Texas state trooper who arrested Ms. Bland after a routine traffic stop in Prairie View, northwest of Houston, turned contentious. Mr. Jordan said Monday’s decision not to indict anyone related only to Ms. Bland’s death and to the conduct of the jail staff.” 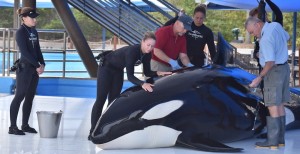 SEAWORLD: Orca dies of bladder infection: “Unna had been under the constant care of the SeaWorld veterinary team and outside experts for the past several months. Unna suffered from a resistant strain of a fungus called Candida, and the team had developed a novel treatment plan in consultation with leading medical experts around the country. While there were some indications that the treatment was having a positive effect, Unna had remained in serious condition and under 24/7 care. Candida, and fungal infections in general, are found in wild cetaceans. A necropsy will be performed to determine the ultimate cause of her death.  In honor of Unna, we have decided to cancel all the killer whale shows at SeaWorld San Antonio today.”

TECH: Apple opposes UK surveillance bill: “We believe it would be wrong to weaken security for hundreds of millions of law-abiding customers so that it will also be weaker for the very few who pose a threat. In this rapidly evolving cyber-threat environment, companies should remain free to implement strong encryption to protect customers” 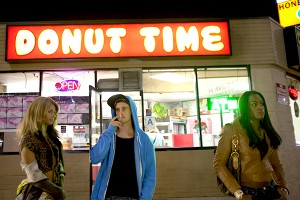 OSCARS: Will Mya Taylor be the first transgender actress to get a nomination, for Tangerine? “Taylor was raised by her grandparents, but she says they kicked her out of the house at age 18 for being transgender. (She has since reconnected with her mother.) After moving to Los Angeles, she struggled to secure legal employment for a number of years.Says Taylor: ‘It’s already hard for the average Caucasian guy to get a job in America. Being transgender (I didn’t have my ID changed to female), it was even harder. It was hard to get a job, because I look like Mya Taylor, but the name on my ID said something completely different. It costs over $400 to get your name and gender changed. I couldn’t afford that at the time.'”

LANCASHIRE, UK: Two pigs heads found outside Muslim school: “We understand the concern that incidents like this, while thankfully rare, can cause in the community,” Chief Inspector Sheena Tattum said. “We have put extra patrols on in the area to try to offer some reassurance.” 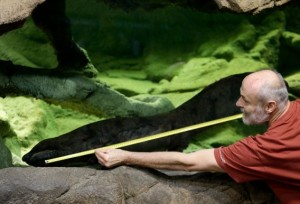 ANIMALS: This 38-year-old giant salamander is the largest amphibian on Earth: “In a statement Sunday, the zoo says Karlo, a Chinese giant salamander it received 19 months ago from the State Museum of Natural History in Karlsruhe, Germany, is likely the biggest representative of its species. The zoo says, according to the latest measurements done Friday, that Karlo is 5 feet, 2 and 3/16 inches long.”

AUTOMOTIVE: This Lexus is the coolest. It has wheels made of ice:

CANADA: This is what a car wash looks like in Jasper National Park, Alberta:

SHARKS: Venezuelan man killed off Aruba just as he was about to be rescued: “In an extraordinary tale of terrible luck, spokesman Roderick Gouverneur said that the man was clinging to a rescue buoy when he was spotted by the coastguard helicopter, which lowered a rescuer to winch him to safety.  However, just as the rescuer was about to reach him, the man was attacked by a shark, suffering fatal injuries.”

And at Australia’s Bondi Beach:

Bondi: "There was a shark sitting on my surfer board" – Surfer Dean Norburn speaking to @morningshowon7. #Bondi https://t.co/oX2xQjruna