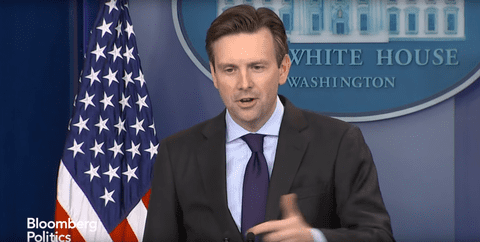 In a press briefing on Tuesday, White House Press Secretary Josh Earnest said that Donald Trump’s statement yesterday that all Muslims should be banned from entering the United States disqualifies him from the presidency.

Earnest went on to call on all GOP candidates running for the White House to publicly denounce Trump in the strongest words possible.

“What he said is disqualifying,” Earnest said of Trump. “And any Republican who’s too fearful of the Republican base to admit it has no business serving as president either.”

Denouncing Trump as a “carnival barker,” Earnest called Trump’s plan “entirely inconsistent with the values enshrined in our Constitution.”

“The question now is about the rest of the Republican Party and whether or not they’re going to be dragged into the dust-bin of history with him,” he said, calling on Republicans running for president to renounce their pledges to support Trump if he wins the GOP nomination.

“If they are so cowed by Mr. Trump and his supporters that they are not willing to stand by the values enshrined in the Constitution, then they have no business serving as president of the United States themselves,” he said.

Earnest insisted that that the rebukes of Trump from the right have not been stern enough. You’ll recall that earlier today Speaker of the House Paul Ryan denounced Trump’s new manifesto on Muslims as “not what this country is about.”

Previous Post: « Meet The Adorable College Athlete Who Came Out on the Day of SCOTUS’ Gay Marriage Ruling
Next Post: ‘Darth Trump’ is the Best Donald Trump Spoof Yet – WATCH »