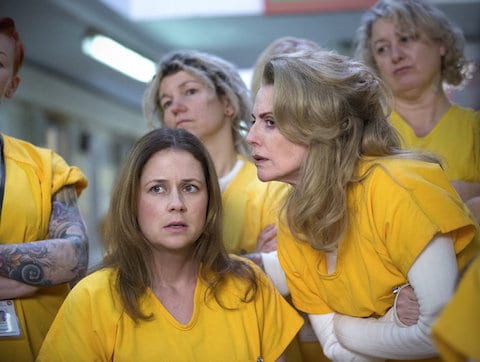 — It’s the end of the world as we know it starting Thursday at 8 p.m. Eastern on NBC. The title of You, Me and The Apocalypse sort of says it all. The Office‘s Jenna Fischer is joined by Rob Lowe and Will & Grace alum Megan Mullally as characters spending their final days before a comet collides with Earth.

More highlights for TV this week below!

—Sorcery, style and sex are the perfect potion for SyFy’s latest fantasy drama, The Magicians. These magic students are older than what you might be used to from Hogwarts, so expect things to get a little bit more scandalous. Among the collegiate conjurers is Eliot (Hale Appleman), portraying a gay student at Brakebills College. The series premieres tonight at 9 p.m. Eastern.

—MTV’s True Life takes a look at two families with trans parents. The episode will focus on a black trans man in the South and his daughter, as well as a trans woman trying to reconnect with her children before leaving for the military. See how they navigate relationships with their children tonight at 11:30 p.m. Eastern.