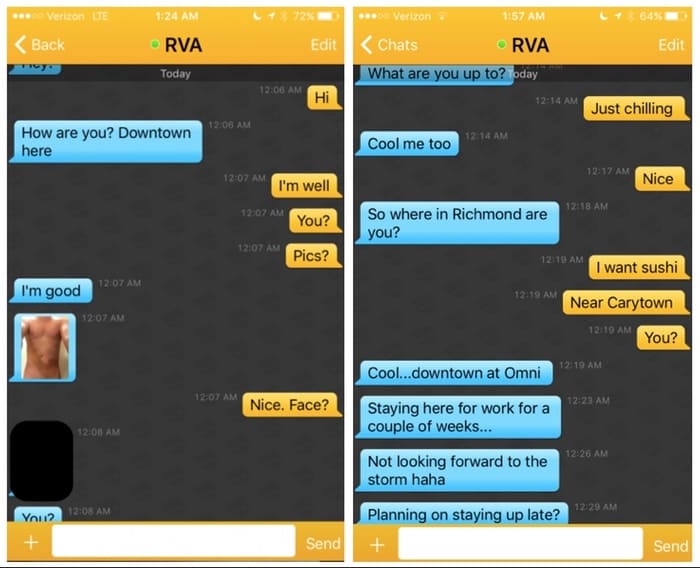 Brad Kutner, a journalist who writes for the Virginia paper GayRVA (you may remember he also broke the story of the anti-gay attack at Amazon that’s now being prosecuted as a federal hate crime), has penned an open letter to an anti-gay Republican lawmaker he discovered cruising on Grindr over the weekend.

Alright, lets also talk about your role as a legislator and how it impacts and affects LGBTQ people in the rest of the Commonwealth. I’ve looked up your voting record and there’s a number of things you voted against which makes me wonder;

Do you ever want to have kids? You voted to make it harder for same-sex couples to adopt by allowing state funded adoption agencies to deny adoptions to people that violate their moral “conscience.”

Even if you don’t want children some day, you have made it damn near impossible for the people you’re trying to sleep with to do the same here in Virginia.

What college did you go to? (I actually know, I googled you!) Well, other folks still in college, like the young man you hit up on Grindr who alerted me, are now living in a state university & college system which allows select official school clubs to discriminate pretty much at will. Those clubs can also gather to rally around causes which could harm LGBTQ folks.

Is that part of your pick up strategy? State-sanctioned negging? It’s been a while since I’ve been single, but you’re a bit too old to be counting on low self esteem to get you laid.

Speaking of age, you totally lied on your profile – also tacky! (Google is an editor’s best friend.)

I know you’re obviously not out at work here at the General Assembly, but I have to ask why you would vote against a law which would have protected LGBTQ Virginian’s for being fired for who they love.

It’s not often that these bills offering these kinds of protections make it to a full house vote, but you managed to take the opportunity to put your own people down.

Self-hatred is not cute, by the way and is thoroughly an unattractive character or personality trait.

Speaking of self loathing behaviors, why did you vote against the appointment of an openly gay Judge? That vote was less-than-subtle on why and how it was targeted – with several conservative Senate members walking out rather than voting him in – but again, you sat there quietly and let the broader anti-gay sentiment at the GA take the driver’s seat.

Thankfully the honorable Judge Thorn-Begland was appointed, but no thanks to you.

Kutner has chosen not to out the lawmaker:

“Outing” someone is not something to be taken lightly and often comes off as tacky or vengeful. The legislator we’re addressing with this letter has a voting record which would make an openly gay man shake their head in disgust, but he hasn’t been specifically vocal on LGBTQ issues. This is one of the reasons we’re choosing to leave them anonymous, however we hope this message reaches their desk and they’ll consider the words below if and when they have a chance to vote on LGBTQ related bills in the future.

I disagree: this legislator’s votes against workplace protections for LGBT people, adoption rights for same-sex couples, and the judicial appointment of a qualified out gay man speak loudly of his hypocrisy and the the particular kind of damage done when closeted conservatives abuse their political power to protect their closets. We’ve heard this song about a thousand times before…

Just another closeted conservative asshole throwing other LGBT people under the bus—attacking other LGBT people with his votes—to deflect attention away from his own sexuality. He figures that no one will suspect him of being gay so long as he maintains a perfect anti-gay voting record—that more than qualifies this asshole for an outing. Here’s hoping Internet sleuths are already on the case; there’s more than enough detail in Kutner’s open letter (and those Grindr pics) to identify this guy, if only through process of elimination. Get on it, Internet.

Well, a bit of googling around on voting records shows that only one of the three delegates from southwestern Virginia was a “no” vote on the nomination of Judge Thorn-Begland. The other two both voted “yes”.