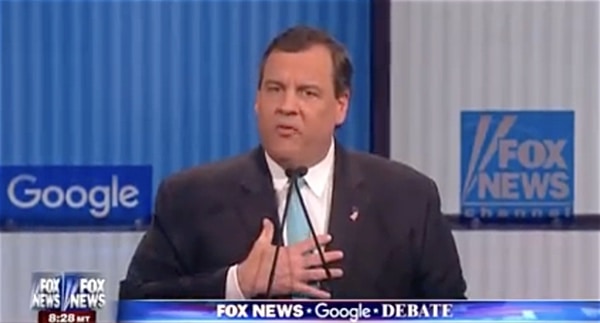 Rowan County, Kentucky Clerk Kim Davis came up at the Republican debate last night in one of the few questions about anything related to gay issues that have come up at any of the GOP debates.

“Gentlemen, we had a case study on religious liberty just this last summer. A county clerk in Kentucky named Kim Davis refused to issue marriage licenses to same-sex couples after the Supreme Court ruling, saying that it violated her religious beliefs. Governor Christie, you said that she must follow the law or be moved to another job that would be in keeping with her conscience. But some conservatives say that that violates her religious liberty.”

No doubt some of the other candidates on stage would have gone down the road in defense of self-proclaimed “Christian warrior” Davis and those who choose to discriminate based on religious beliefs, but Christie took another tack.

“You know, we all have our own individual interpretations of our faith. And here’s the problem with what’s going on around the world. The radical Islamic jihadists, what they want to do is impose their faith upon each and every one of us — every one of us. And the reason why this war against them is so important is that very basis of religious liberty. They want everyone in this country to follow their religious beliefs the way they do. They do not want us to exercise religious liberty. That’s why as commander in chief, I will take on ISIS, not only because it keeps us safe, but because it allows us to absolutely conduct our religious affairs the way we find in our heart and in our souls. As a Catholic, that’s what I want to do. And no matter what your faith is, that’s what I want you to be able to do.”

Chris Christie somehow manager to turn his Kim Davis question into destroying ISIS…how…what the fuck? Who are these people?!?

Only in a political debate can a question about Kim Davis have an answer of "I'll bomb ISIS!" #GOPDebate