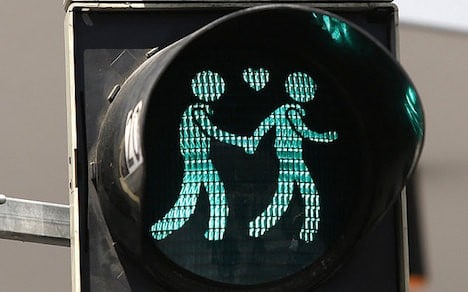 The city of Linz, Austria will get its gay-themed traffic lights back after opposition from the anti-gay, far right Freedom Party was overruled by the city council, The Local reports:

Markus Hein of the FPÖ is the city’s traffic official and had objected to the lights on the grounds that “traffic lights are for traffic and should not be misused to impart advice on how to live your life”.

Instead of the usual stick man, the special lights at pedestrian crossings show two figures: either a man or a woman, two men or two women, holding hands, together with a little heart symbol.

Stefan Thuma, a spokesman for gay rights group HOSI, welcomed the decision to reinstall the lights at several crossings in Linz, saying that scrapping the lights had attracted “international attention and was an embarrassing spectacle”.

Vienna’s meanwhile, which were installed during the Eurovision song contest, are permanent.