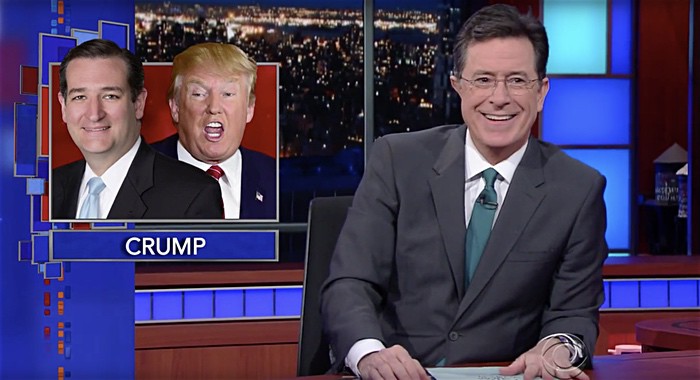 Like most people, Stephen Colbert is aghast at the amount of people still running for president, and wonders when the herd will be culled.

Particularly troubling are frontrunners Ted Cruz and Donald Trump, for whom Colbert has created a particularly fitting celebrity nickname: Crump.

“Donald Trump still holds a commanding lead in national polls so the GOP establishment is lining up behind him to push him in front of a train.”

Conservatives are so troubled by their choices the National Review just came out with an entire issue filled with anti-Trump essays:

“Bill Kristol, Michael Medved, Erick Erickson, the Dowager Countess, the Monopoly Guy. Basically all of these guys are saying ‘Go to hell. Do not pass go. Do not collect $200.”

In related news, a new ABC/Washington Post poll puts Trump as the likely winner of the GOP nomination:

Donald Trump holds his lead for the GOP nomination and has soared in expectations: 64 percent of Republicans and Republican-leaning independents now expect him to be the party’s nominee, up sharply in the last two months.

Expectations that Trump will win the nomination have jumped by 25 percentage points since November among Republican-leaning voters in a new ABC News/Washington Post poll. Two-thirds also say they’d accept him as their party’s nominee. And he’s seen by 56 percent as their most electable nominee in the general election this fall.

Trump has 37 percent support nationally among Republicans who are registered to vote, unchanged from last month (with no bounce from his endorsement by Sarah Palin). Ted Cruz has advanced by a slight 6 points from last month, and 15 points from October, to a clear, if somewhat distant, second place, with 21 percent. Marco Rubio’s in the third slot, 11 percent, with all others in the single digits in this poll, produced for ABC by Langer Research Associates.