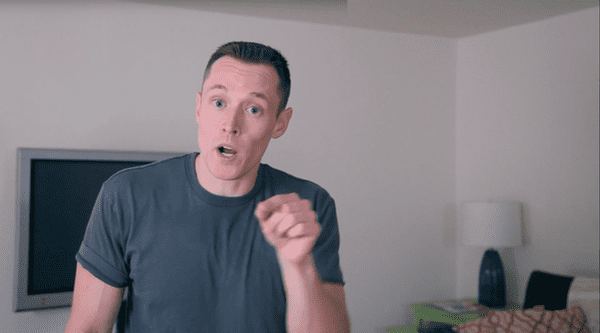 In his latest YouTube video, Davey says he has had enough of hearing younger gay guys make derisive comments about older gay men.

Davey says, “I am so sick and so tired of seeing young gay guys walk into a club, for example, I get so fired up about this, and they’ll be like, ‘Ew! That old creepy gay guy is so disgusting. He’s so gross. He looks like Santa Claus. Ew, he checked me out! Ew!’ Let’s think about this for a second. That creepy old gay man that looks like Santa Claus and the people of his generation are literally – literally! – the only reason that you can walk down the street in your pink f*cking tank top, holding your boyfriend’s hand and not get your ass beat.”

RECENTLY – Davey Wavey and Colby Melvin Share Everything They Know About Being a Good Bottom: WATCH

Davey adds, “Every aspect of your stuck-up cocky gay world was built on the sacrifices that that man made. And yes, maybe he is old. But guess what? He cannot help his age. You on the other hand can help your attitude. So shut up and show some f*cking respect.”

Class is in session with Davey, so take notes and watch, below.

Previous Post: « Michael Phelps Strips Down to His Speedo at College Basketball Game – WATCH
Next Post: This Is The Gay Kiss Pakistan Didn’t Want People to See – LOOK »