You are here: Home / Thousands Rally Across Italy in Support of Gay Civil Union Bill 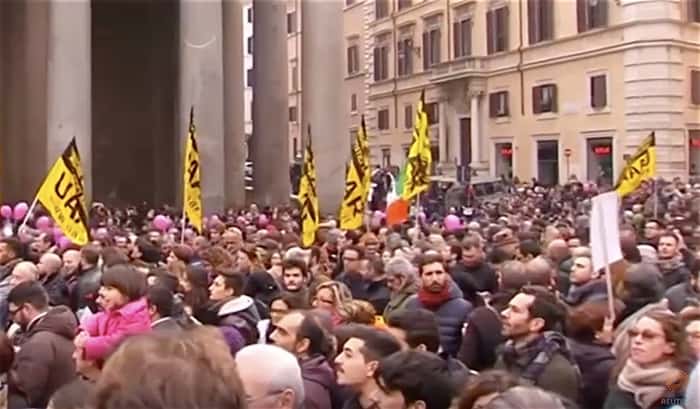 Bearing signs that read “It’s time to be civilized. Wake up Italy,” thousands gathered in Rome and in gay rights protests around Italy in support of a civil union bill that is under consideration by the parliament, a bill that would finally give some measure of rights to gay and lesbian people in the third largest economy in the Eurozone.

According to Italian media, there were at least 7,000 demonstrators in Turin, 5,000 in Milan, thousands in Rome and Bologna, a thousand in Bari in the south, and hundreds in Naples and Venice among others.

“It is a historic day for this country, an immense protest that was fed by the desire and enthusiasm of a lot of people who hold the belief in equality close to their hearts,” said Gabriele Piazzoni, the national secretary of Italy’s biggest gay rights group, Arcigay.

Parliament begins to hear the civil unions bill on Thursday, but already conservatives have been trying to add amendments that would kill its chances, such as one that would mandate prison terms for gay couples who hire overseas surrogates.

AFP adds that protests were held in 90 cities across Italy yesterday, and opponents are planning a response:

Opponents of the bill, in contrast, are planning a show of strength at a demonstration scheduled for January 30 in Rome’s Circus Maximus. Hundreds of thousands are expected to attend the self-styled “Family Day,” organised by mainly Catholic groups under the battle cry of “Defend our Children”.

Angelo Bagnasco, the chair of the Italian conference of bishops, has denounced the whole debate as a “grave and irresponsible distraction from the real problems of the country”.

Watch a report on the rallies from Reuters:

And here are some clips from some of the rallies around the country: