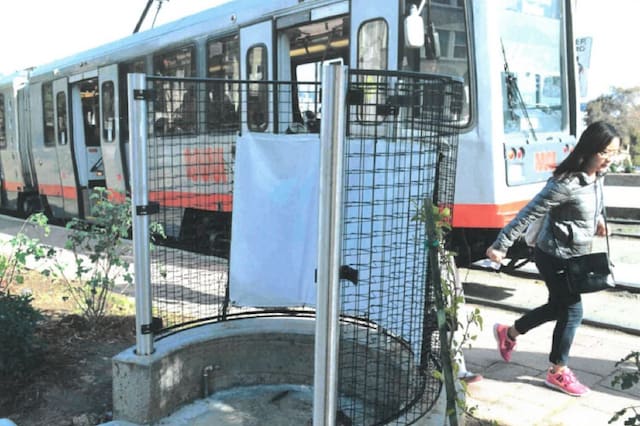 The Pacific Justice Institute is threatening to sue the city of San Francisco if officials don’t remove an outdoor urinal near the area known as the “Gay Beach” in San Francisco’s Dolores Park.

The group, which led an unsuccessful 2013 campaign to deny transgender students access to facilities that match their gender identities, has been labeled an anti-LGBT hate group by the Southern Poverty Law Center.

The concrete circular urinal, installed last month at a cost of $15,000, is designed to relieve the problem of men urinating in the bushes due to a shortage of restrooms in the park.

But the Pacfiic Justice Institute sent a letter to the city last week, threatening to file suit if the urinal is not removed by Feb. 24. The group claims the urinal “violates community standards of decency, jeopardizes public health and is inconsistent with the law.”

From the Associated Press:

“This is more than stunning and disgusting. It’s a human regression of mankind,” said Frank Lee with the Pacific Justice Institute, one of the groups that joined forces in protest. “If this is not stopped, this will become the norm in San Francisco and spread to other cities.”

Brad Dacus, president of Pacific Justice Institute, called it a “new low even for San Francisco.”

“It is also blatantly illegal,” he said. “The city has not even attempted to comply with its own ordinances, much less state or federal law. We intend to hold them accountable. Public urination is bad enough; spending taxpayer money to promote it is indefensible.”

The institute’s letter alleges that the urinal violates the privacy of those who choose to use it, especially females, as well as bystanders who might be exposed to someone urinating.  The letter also says the urinal is non-compliant with the Americans with Disabilities Act, and unsanitary because there’s no sink for people to wash their hands.

A spokesman told the Examiner that the city intends “to give their legal theories all the consideration they deserve.” Read the letter and watch a report on the new urinal from KNTV below.

h/t: SFist
Previous Post: « What To Watch On TV This Week: ‘How To Get Away With Murder’ Returns; Melissa McCarthy Back on ‘SNL’
Next Post: Monday Night News: Archie Comics, India, Rachel Maddow, Open Relationships, Male Model Instagram »