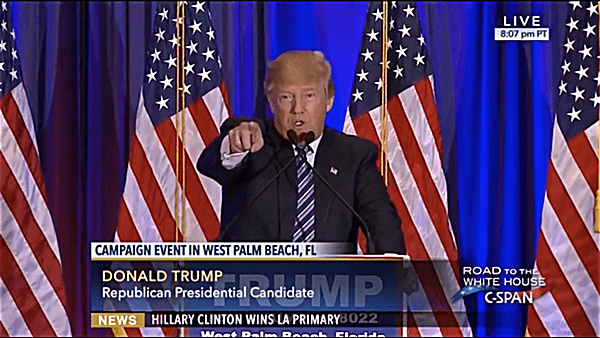 On Saturday, Donald Trump held a press conference and told a reporter to “sit down” after he refused to clarify his murky position on gay marriage.

The question came from conservative British publication The Daily Mail. In responding to The Mail‘s question, Trump tried to deflect attention away from the fact that many of the statements he has given about same-sex marriage fail to line up with one another.

DailyMail.com asked Trump to say whether or not he favors marriage rights for gay and lesbian couples, and whether U.S. Supreme Court justices he might appoint would be expected to work toward overturning ‘Obergefell v. Hodges,’ the 2015 decision that legalized such unions nationwide.

‘We have policy on it. And I’ve said it very, very strongly,’ Trump replied, without saying what that policy is.

‘And I think you know it. And it’s all done and, you know, in a campaign how many times do I have to say it?’

Pressed by the reporter Trump said, “We’re not here for discussing that. But everybody knows how I feel on it.” He then added, “Sit down – you know my position”:

‘You’ll have to ask him,’ Lewandowski insisted. ‘I don’t speak for the candidate.’

As Trump worked his way through a crowd of well-wishers after the event, DailyMail.com asked him pointedly whether or not he agrees with the Obergefell ruling.

‘I’ve answered this question a bunch of different times,’ he replied.

Informed that he hadn’t in fact answered that question in the past, Trump promised a telephone interview – ‘a long conversation’ about the subject on Sunday.

‘I’ve answered that question so many times,’ Trump protested. ‘Call me tomorrow.’

While on the campaign trail, Donald Trump has promised to appoint conservative justices to the Supreme Court, in the vein of Antonin Scalia, who would overturn gay marriage, told evangelical Christians that they can ‘trust him’ on gay marriage, said that gay Americans can expect to see progress on equal rights if he’s elected president, that Obergefell is the law of the land and should be accepted as such, and that he’s in favor of traditional marriage despite having many “fabulous friends who happen to be gay.”

The Daily Mail also points out that Trump has no policy paper on gay marriage on his website as he claimed during Saturday’s press conference.

Watch video of his interaction with the journalist he told to sit down, below.