In a perfect world we would always have room for our Best Actresses as they age but in the world we actually live in only British Dames and Meryl Streep are allowed to do that. And Tilda Swinton — but she lives inside her own space and time continuum. The expiration date on female movie stars — their “last f***able day” (thank you Amy Schumer) — before they disappear into thankless supporting roles used to be 40 and now it’s thankfully extended until about 50. But at some point in most star careers the lead roles all too abruptly stop.

That’s why it was a joy last summer to see Lily Tomlin ace a rare film-carrying job in Grandma and why it’s nice to have a spiritual sequel just months later in Hello, My Name is Doris. The two films are nothing alike but for their creative foundation. They’re both star vehicles for a senior legend that seem carefully crafted entirely around her specific gifts. Which is to say that with Grandma we got an acerbic feminist politically savvy LGBT comedy and with Hello, My Name is Doris we get a cutesy boy-crazy romantic dramedy because Lily Tomlin and Sally Field are very different performers.

The new movie, cowritten and directed by Michael Showalter (best known as “Coop” from Wet Hot American Summer) spins around a lonely accountant named Doris whose mother has just died leaving her emotionally raw. She has a best friend named Roz (Tyne Daly, stealing all her scenes) who worries about her but otherwise she’s quite lonely. Her life is spreadsheet drudgery and long commutes to her hoarder’s existence in Staten Island in the house her fed-up brother and sister-in-law (Stephen Root and Wendi McLendon-Covey), want her to sell. During all this upheaval Doris develops an instant crush on John (Max Greenfield) a handsome friendly new manager at work and becomes impossibly convinced that they could have a future together. 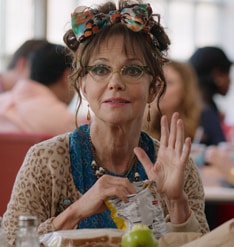 Yes, that’s a lot of situation for a comedy but with its tight focus on Doris’s inner life, the movie somewhat nimbly gets its many sitcom plot threads to dovetail with her journey.

People who should avoid Hello, My Name is Doris:  Anyone who breaks out in hives at the adjective “quirky” and especially anyone who has ever said that any woman should “act her age.” To the film’s great credit it’s not ageist at all but instead reflects the major, medium, and minor hurts that spring from ageist culture, whether that’s straight up disdain, being ignored, or the benevolent but reductive “old people are cute!” tokenism. The latter happens to Doris in her office and in social events when John takes a liking to her, surprising both himself and their coworkers…

She’s weird. But a good weird.

In a series of totally implausible incidents which still play out with uncomfortably plausible emotional beats, John and Doris become closer and confusions mount to a breaking point. If you’ve ever seen Steel Magnolias (Ha — as if you haven’t!!!) you’ll  know how much gold Sally Field can mine from psychotic break size shifts between comedy and drama in the same scene and this unique ability comes in handy again. On the surface this is very much an uneven broad unrequited-romantic comedy in which some of the jokes, particularly the sexual ones, don’t land. Yet it manages to be both funny and endearing because Field knows to play both external comedy and internal drama; she’s been toggling between them her whole career. In the best scenes she wears both as visibly as the two pairs of glasses she’s often clumsily sporting. 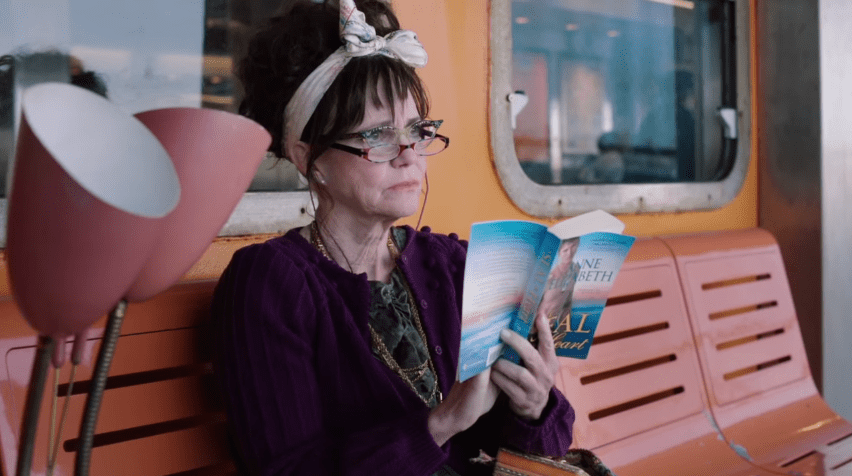 Hello My Name is Doris  never punishes Doris for the baggage that comes with age or painful personal failings or even for her often ridiculous fashion sense, but respects that this is just who this weird lady is. In one of the strongest scenes Roz and Doris have a rare fight that’s ostensibly about dinner plans but really about their mutual inability to let stuff go. Doris lashes out at Roz for being too obsessed with her dead husband “He died 15 years ago!”  Roz lashes back at Doris’s hoarding. “Says the woman who has packets of duck sauce from the 1970s.”

People who should see Hello, My Name is Doris: anyone who understands that the human desire for friendship and romance and a little adventurous break from daily monotony has no expiration date. And, above all else people who’d like to see Sally Field in great form again. She keeps.