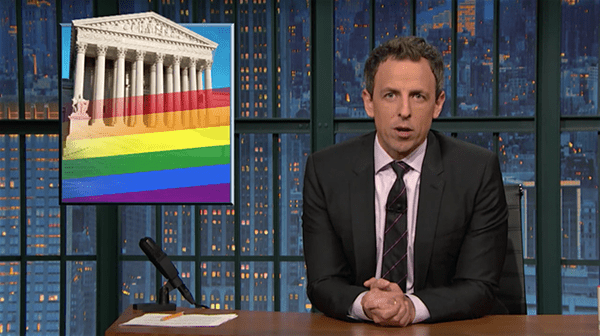 On Wednesday, Seth Meyers took a searing look at the current crop of anti-LGBT “religious freedom” bills that have popped up in places like Georgia and North Carolina.

Meyers dug into how such bills began to surface in increasing numbers after the Supreme Court’s ruling on gay marriage last June. Surprisingly, these bills have continued to be put forth despite the backlash that Indiana and Governor Mike Pence received over the Hoosier State’s so-called “Religious Freedom Restoration Act.”

Meyers joked, “Georgia must have seen the backlash and said, ‘Yeah! We should get in on that!”

RawStory reports on Meyers’ take down:

Georgia’s bill was so broadly written it would have qualified notorious right-wing companies like Chick-fil-a and Hobby Lobby as “faith-based institutions,” enabling them to fire people for their sexual orientation. State Senator Emanuel Jones confronted the Georgia bill’s author, Greg Kirk, with the broad description, asking if it would also allow protections for the KKK as a “faith-based institution.” Kirk’s response was, “I’m not an attorney” and “I don’t know. I guess they could.” When asked if that was a problem for him, Kirk had a hard time answering. “Does it present a problem for me? No,” he ultimately answered.

“First of all, anytime you take that long of a pause to answer a question you’re already in trouble,” Meyers said. “Second of all, what’s with Republicans suddenly getting stumped by questions about the KKK? It’s like getting the round one question wrong on ‘Who Wants to be a Millionaire.’”

Turning to North Carolina and Governor Pat McCrory, Meyers quipped that you know you’re in the wrong when newspapers like The Charlotte Observer compare you to segregationists like George Wallace, Orval Faubus and Ross Barnett.

Referring to HB 2, which bans all local LGBT rights ordinances, Meyers said, “That’s how bad this law is. North Carolina’s newspapers have to reach for deep cut segregationists like Ross Barnett and Orval Faubus. Even if you don’t know who Orval Faubus is, you can just tell from his name he was a hardcore racist. Orval Faubus is the name of someone who at one point definitely said, ‘Well, well, well. What do we have here?’”

As for where laws like these will take us if they continue to succeed, Meyers suggested we need only to look to Florida. In that state, proposed legislation would require people to show ID before using a bathroom. Which Meyers joked will lead to a new job no one wants: toilet bouncer.

Watch (and don’t miss the cameo from our favorite dancing ‘hot cop’), below.