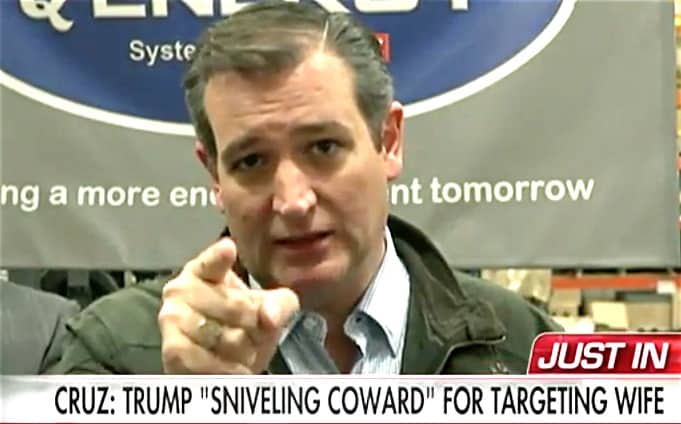 Ted Cruz erupted during a news conference in Wisconsin in response to Donald Trump’s attacks on his wife, Heidi.

Said Cruz: “It’s not easy to tick me off. I don’t get angry often. But you mess with my wife, you mess with my kids, that’ll do it every time. Donald you are a sniveling coward and leave Heidi the hell alone.”

Cruz and Trump have been engaged in a Twitter war all week which began when an anti-Trump SuperPAC published a photo shoot of Trump’s wife Melania from 2000 with the caption “meet Melania Trump. Your next first lady. Or, you could support Ted Cruz on Tuesday.”

Trump escalated the feud by threatening to “spill the beans” about Cruz’s wife:

Cruz had responded more cautiously about the tweet in an earlier interview, as we reported on Wednesday, saying “If Donald wants to get in a character fight he’s better off sticking with me, because Heidi is way out of his league.”