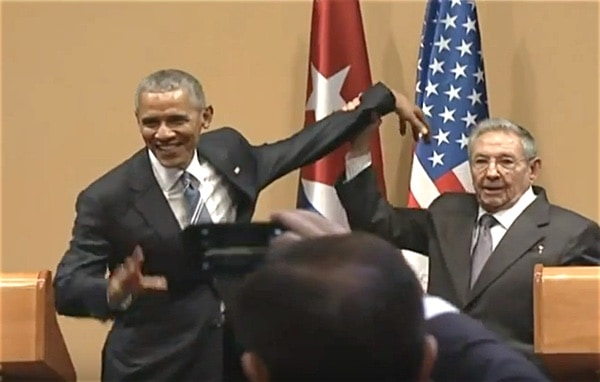 President Obama and Cuban President Raul Castro had an awkward moment at a press conference on Monday when the presser concluded and Castro began lifting Obama’s arm into a unity pose.

Obama wasn’t too keen on that idea.

The press conference itself, while historic, brought up longstanding grievances, particularly on human rights.

RELATED: The Secret Story of the Last Presidential Visit to Cuba

Human rights groups quickly produced rosters, distributed over email and social media, of people they said had been imprisoned in Cuba for demonstrating against or otherwise challenging Mr. Castro’s government.

Mr. Castro sought to turn the human rights criticism on the United States, arguing that countries that do not provide universal health care, education and equal pay are in no position to lecture Cuba. He also said Guantánamo should be returned to Cuba.

“It’s not correct to ask me about political prisoners,” Mr. Castro said.