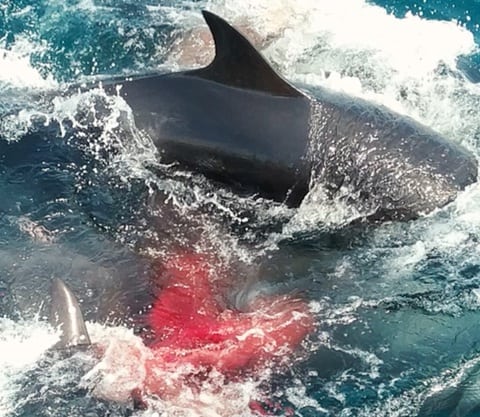 A whale watching boat off of Dana Point, California was watching a pod of false killer whales when a bright patch of blood blossomed at the surface of the water. What they saw next was something no tour boat has ever recorded.

The tourist’s shock turned to amazement when they saw a baby whale leap from the surface and realized that what they had just witnessed was a live birth. The whales stuck around, pushing the baby to the surface of the water to help it breath during its first moments out of the womb.

Said tour company owner Dave Anderson to the L.A.Times: “I’m so thankful they chose to do it in front of our boat. It’s got to be one of the biggest things that’s ever happened out here. This birth is one of a kind and I’ve been doing whale watching for 20 years.”

Said the boat’s captain Tom Southern to the OC Register:

“The females came up right next to the boat and all started pushing at the side. Then you see this spurt of blood and you think they got something – but instead you see a baby pop out. He was about 2 1/2 feet-long and his fins were all folded together. He was lying on his side and flopping around like a fish….“I don’t know if anyone has ever seen a false killer whale give birth. At least no other commercial boat has reported this.”

False killer whales, which are members of the dolphin family, are also rare off of southern California: “Southern remembers only two sightings in 15 years on the water.”