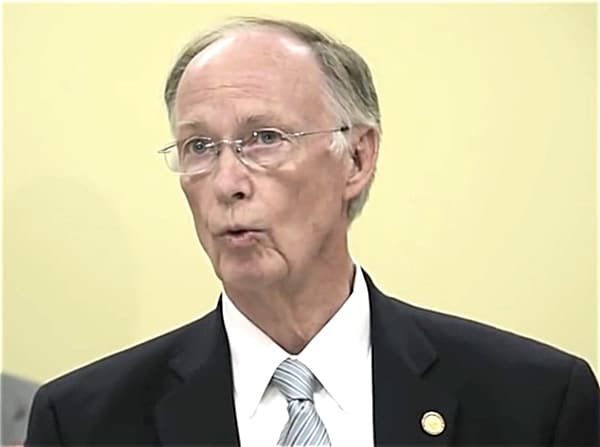 Alabama Governor Robert Bentley, who has opposed same-sex marriage and made a name for himself as a “family values” kinda guy, has asked god to forgive him for having an affair with aide Rebekah Mason. Mason has since resigned.

Last month, we reported that Rachel Maddow exposed the hypocrisy of Bentley’s affair because “he ran as a man who so believes in the sanctity of traditional marriage that he would fight same-sex marriage with every fiber of his being. His administration filed a Supreme Court brief that said marriages between same-sex couples should not even be thought of as marriages, they should be seen as social experiments.”

“He has been a crusading family values politician who has campaigned on the superior morality of his own marriage, his own family and his own family values, and how he’s going to save Alabama from other people’s terrible, immoral family choices because his values and his family are superior.”

NOW: Resolution being introduced in Alabama to impeach Gov. Robert Bentley. Tune in to @MSNBC for the latest. pic.twitter.com/OUEIVrCy9I

Speaking at a Limestone Correctional Facility event yesterday, the god-fearing lawmaker said he has “asked God to forgive me because that’s the most important thing.” He continued:

“I want back in [god’s] fellowship. And so I asked God to forgive me. But I asked other people to again forgive me and I’ve already done that and I have truly asked the people of this state – they’re the folks who love me and are the best people in the world – I have asked them to forgive me.”

However, according to AL.com, he shied away from the possibility of resigning from office:

“I have humbly opened myself up to the people of this state and I have asked them to forgive me. And let me continue to do the things they elected me for twice and that’s to try to make their lives better. And that’s what I’m going to do.

“And, you know, it’s mine. I own it. I own it. I did it. I point no fingers to anybody else. I make no excuses from that. I own my problem. It’s not your problem. You have other problems. It’s not your problem. It’s my problem and I have to deal with that. And so I have humbly opened myself up to the people of this state and I have asked them to forgive me. And let me continue to do the things they elected me for twice and that’s to try to make their lives better. And that’s what I’m going to do.”

He added that talk of impeachment would not distract from discussions of his prison reform bill and other legislative matters. He also said the scandal would not affect the recruitment of industry from outside the state:

“It is not [affecting my job]. This has been addressed a long time ago. It really has. It’s all been clarified, it’s all been addressed. I have put it in the rear-view mirror. Others have not because it’s obviously been brought out now. It’s one of those things that I take full control of. It’s me. I did it. I did it. And that’s why I ask the people of this state to forgive me because they are a forgiving people and they know God’s grace.”

Listen to an excerpt of a recording of Bentley making sexually suggestive comments to Rebekah Mason during a phone conversation.

Previous Post: « FL Gov. Rick Scott Gets Run Out of Starbucks by Woman Calling Him an A**hole: WATCH
Next Post: Transgender Former Whole Foods Employee Says Co-Workers Called Him ‘It’ »