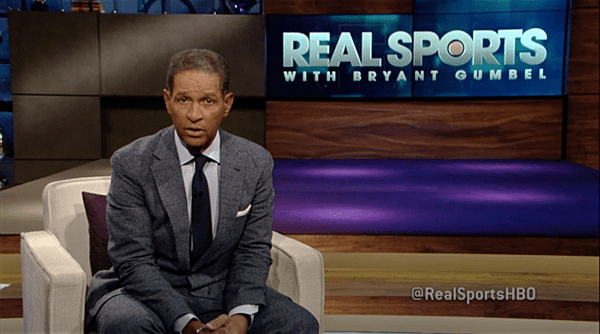 Bryant Gumbel has called on the NBA, the NFL, and the NCAA to cancel events scheduled to take place in North Carolina because of the state’s newly passed anti-LGBT ‘bathroom bill’, HB 2.

As we’ve been reporting, businesses have already been canceling planned expansions in the state and performers have canceled upcoming shows over HB 2.

Famed former NBA player Charles Barkley has already called on the organization to move its 2017 All-Star Game slated to take place in Charlotte. The NBA, however, has not signaled it’s ready to make such a decision. Rather, NBA commissioner Adam Silver has said, “We should be working toward change in North Carolina.”

Gumbel, however, urged the NBA and other professional sports organizations to “do the right thing.” Said Gumbel,

“Finally tonight, a few words about HB2, a newly passed bill in North Carolina that has been labeled the most extreme anti-LGBT measure in the country. It uses the guise of bathroom concerns to deny certain rights to gay and transgender people and effectively green lights discrimination towards them.

What does that have to do with sports? Not a lot. Only that many of our top sports officials have so far turned a blind eye when taking action could mean a lot.

Since it’s never too late to do the right thing, here’s hoping all those guys may yet lead by showing lawmakers in North Carolina and other states considering such measure that their bigotry has a price. Here’s hoping they come to understand what smarter people have often said: prejudice tolerated is intolerance encouraged.”