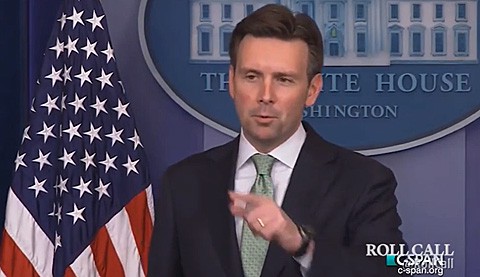 White House Press Secretary Josh Earnest was asked today during the press conference about anti-LGBT legislation pending in Tennessee and whether the legislation, if passed, would result in a loss of federal funding. Earnest took the opportunity to comment on Mississippi and North Carolina as well:

Well, this is a question that individual agencies have been considering after previous states have passed these bills into law. I don’t know what mechanism is in place for individual agencies to consider those kinds of questions in advance of a law being passed, but you can check with the Department of Education for greater clarity on that.

What I can tell you is that the administration is firmly committed to promoting and defending equal rights of all Americans, including LGBT Americans. And specific laws like this that seek to target and marginalize one small segment of the population is nothing less than mean-spirited. That was true when they passed similar provisions in places like North Carolina and Mississippi, and it’s true even as it’s being considered in a place like Tennessee.

What’s also true in Tennessee is that that state has thrived economically in part because of their ability to make their case to businesses across the country that they’ve got a great climate for doing business. Passing mean-spirited bills through the state legislature is not a good endorsement of your business climate. And ultimately, individual businesses will have to make their own decisions about this.

I think what is also true is that states like Tennessee and, to a certain extent, North Carolina and Mississippi, have a long history even over the last couple of generations of working through questions of civil rights. And President Obama has talked on a number of occasions about the important progress that our country has made with regard to civil rights. This is a good illustration that the fight for civil rights is not over, and demanding equality for every American and ensuring that those Americans are not singled out or targeted because of their sex or their race or what their last name or their religion, or who they love or who they are is a struggle that continues. And the President, every time, is going to be on the side of equality and fairness and justice for every American.

Earnest was then asked whether he knew when reviews by federal agencies of the North Carolina and Mississippi laws would be complete:

I don’t have an expectation for that. You’ll have to talk to the individual agencies about that. They’re obviously coordinating their activities among themselves, and they’re obviously doing this work in conjunction with the Department of Justice, because there are important legal questions that need to be resolved. But I don’t have an update for you in terms of when that work will be concluded.

Tennessee’s Attorney General yesterday advised the legislature that the state would put millions of dollars of federal funding for schools at risk should the legislation be passed.

Previous Post: « Deutsche Bank Halts Plans for 250 Job Expansion in NC Over Anti-LGBT Law
Next Post: Mississippi Governor’s Son Was Once Attacked Because He is Gay: REPORT »