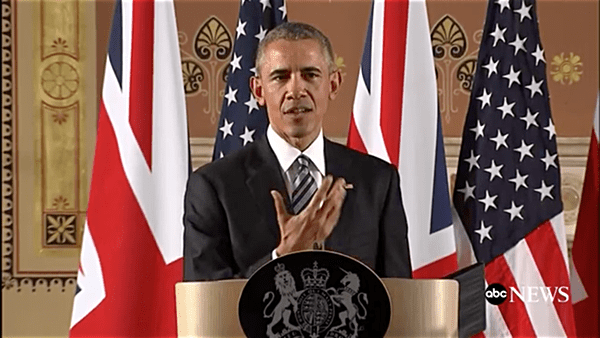 President Obama on Friday said that anti-LGBT laws recently passed by lawmakers in Mississippi and North Carolina should be overturned.

President Obama made his remarks while at a joint press conference with British Prime Minister David Cameron.

Earlier in the week, the UK issued a travel advisory for LGBT travelers heading to North Carolina and Mississippi, warning them about the newly-passed anti-LGBT laws in both states.

“I also think that the laws that have been passed there are wrong and should be overturned and they’re in response to politics in part and some strong emotions that are generated by people,” Obama said.

Obama first said that he wanted everyone in the UK to know that the people in North Carolina and Mississippi are hospitable. Of advocates for anti-LGBT laws, Obama added, “Although I respect their different view points, I think it’s important not to send signals that anyone is treated differently.”

Watch video of Obama making his remarks at the press conference with Cameron, via ABC News, below.

Pres. Obama says he thinks 'anti-LGBT' laws passed in NC and MS "are wrong and should be overturned." https://t.co/zOGCqrq8nJ