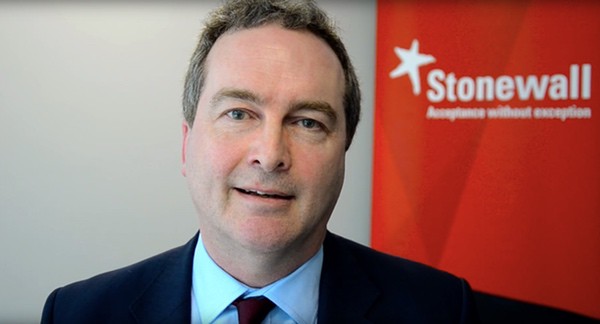 Robert Hannigan, the Director of British digital espionage agency GCHQ (Government Communications Headquarters) apologized for the organization’s treatment of homosexuals over the years in a speech to UK LGBT rights group Stonewall.

Said Hannigan in the speech (which you can read in full here):

Those of you who saw The Imitation Game, who are Benedict Cumberbatch fans, or who have read about Bletchley Park, our wartime code-breaking centre, will know that our most famous member of staff was Alan Turing. He’s become famous for two reasons – one, his mathematical genius which led to the breaking of the German Enigma code and shortening the Second World War and all the lives that that saved, but also the creation of the world’s first digital computer and everything that now flows from that, including the Internet. He’s also famous for being gay, and sadly famous for his treatment; his conviction, prosecution and chemical castration at the hands of the criminal justice system, and his subsequent suicide in 1954.

So much has been said and filmed about Turing that I won’t add to it this morning. But in our building he is revered as a genius, as a problem-solver who was not afraid to think differently and radically – an example to others. And in the horrifying story of his treatment, a small ray of light is that he was not abandoned by all of his colleagues at GCHQ – many stood by him and our then Head of Cryptanalysis – chief code breaker – testified at his trial. And Joan Clarke – Keira Knightley in the film – who was engaged to Turing, stayed a friend of his for the rest of his life. And she worked with us until the late 1970s and stayed in touch with us during the 1980s and had a long, brilliant career as a cryptographer.

It was partly to honour Turing that we lit up our building to celebrate IDAHOBiT day last year. It was also kind of an act of atonement – for the lost opportunity of his early death. Who knows what Turing would have gone on to do, where, for example, he might have taken his pioneering interest in Artificial Intelligence, which is the the thing everyone is talking about. We will never know and should, as a society, never repeat that mistake.

And that loss is not just about Turing.

When we lit up the building I had a long and moving letter from a former member of staff, Ian, who served in the RAF and joined us in 1961. After seven years of exemplary service, with very strong prospects for the future, he was interrogated on suspicion of being homosexual, he was summarily dismissed and escorted out of the building. He got no support from anyone in authority at all, even his union, and no-one ever followed up to check on his well-being or to show any compassion. Not surprisingly, his health suffered and the psychological effects of that humiliation were long-lasting. While he eventually found other employment in another part of the Civil Service, he is surely right in believing that in career terms he never reached the potential expected of him – his prospects were cut short, curtailed because he was subject to what now seem completely archaic rules on sexuality.

In his letter, Ian asked me if I would apologise publicly on behalf of GCHQ – not in some way to ‘pardon’ him because, as he said, he did nothing wrong – but to apologise to him for his treatment. I am happy to do so today and to say how sorry I am that he and so many others were treated in this way, right up until the 1990s when the policy was rightly changed. The fact that it was common practice for decades reflected the intolerance of the times and the pressures of the Cold War, but it does not make it any less wrong and we should apologise for it.

Their suffering was our loss and it was the nation’s loss too because we cannot know what Ian and others who were dismissed would have gone on to do and achieve. We did not learn our lesson from Turing.

In a post-speech interview, Hannigan spoke with the organization about that and other issues they’re working on with regard to LGBT rights.