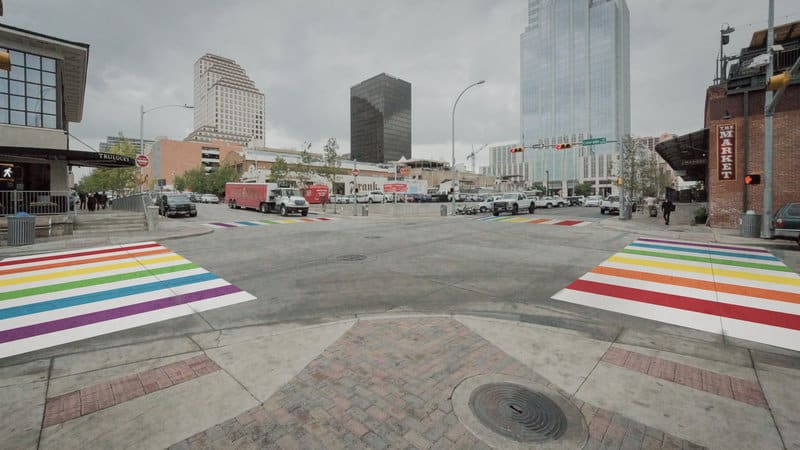 LGBT advocates in America’s third-gayest city have renewed their push to install rainbow-colored crosswalks on a downtown street.

Austin Pride wants two rainbow-colored crosswalks on Bettie Naylor Street — named for a pioneering Texas LGBT activist — in the city’s warehouse district, which is home to its largest gay nightclubs.

The rainbow crosswalks received initial approval from the City Council in 2014, but the proposal was later rejected due to a lack of public support after some nearby business owners objected.

Now, Austin Pride has launched a Change.org petition to resurrect the project:

The Rainbow Crosswalks for the 4th & Colorado area were approved by the Austin City Council in 2014, with the caveat that the proposal be sent to the City Of Austin Art & Cultural Board for Artwork Donation Approval. That Art & Cultural Board voted it down, due to, in part, the ‘lack of public support’, which was initially gathered on their website, prior to the Board Meeting/Vote. They were also swayed by a couple of local businesses that didn’t want the rainbow crosswalks near their businesses. It is important to note that the City of Austin is in support of the proposed crosswalks. Support is to be reintroduced to the City and the Arts & Cultural Board for approval. Please take a moment and sign this petition, which will be presented to the City Council as proof of public support for this project.

What The Rainbow Crosswalks Will Represent?

Above all, the crosswalks will be an indication of Austin’s inclusion, unity, and acceptance.

It will stand as a beacon and a symbol of diversity to everyone who lives in and visits Austin, as a city that is welcome to and accepting of everyone, regardless of sexual orientation or gender identity.

The initial installation is proposed to be provided by the City of Austin. Up keep and repainting will be paid for utilizing private funds and donations gathered by the Austin Gay and Lesbian Pride Foundation.

Nearly 2,500 people have signed the petition in the three days since it was launched.

Other cities with rainbow-colored crosswalks include San Francisco, Toronto and Vancouver.