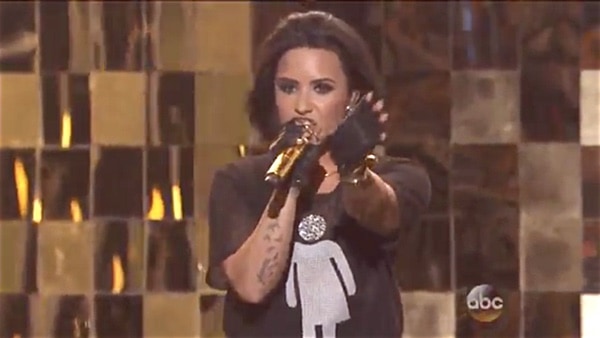 Demi Lovato made a statement in support of the transgender community during last night’s performance of “Cool for the Summer” at the Billboard Music Awards. Her sparkly mesh top was emblazoned with the familiar symbol signifying gender neutral facilities.

Lovato and her tourmate Nick Jonas canceled their concerts in North Carolina recently as a sign of opposition to anti-LGBT HB 2, which forces trans people to use the bathroom corresponding to their biological sex at birth.

Lovato has proven herself a consistent ally to the LGBT community over the course of her career. She released videos in support of marriage equality in July 2014. Said Lovato in the video:

“I believe that love comes in all different shapes, sizes and colors. So whether you’re LGBT or straight, your love is valid, beautiful and an incredible gift. So let’s protect love and strengthen the institution of marriage by allowing loving, caring and committed same-sex couples to legally marry.”

She also revealed her late grandfather was gay at a Logo Trailblazers event in June 2014:

“I’ve never spoken about this before, but my grandfather himself was a trailblazer. He was brave enough to come out in the 1960s, and I feel a lot of my spirit has come from him,” she said. “He passed away a few years later and I only wish he could have been able to see all the progress that has been made.”

Last September she explained to UK talk show host Alan Carr that “Cool for the Summer” was about experimenting with the same-sex, suggesting to Carr that she might be bisexual herself.

Watch a clip from the Billboard Music Awards: