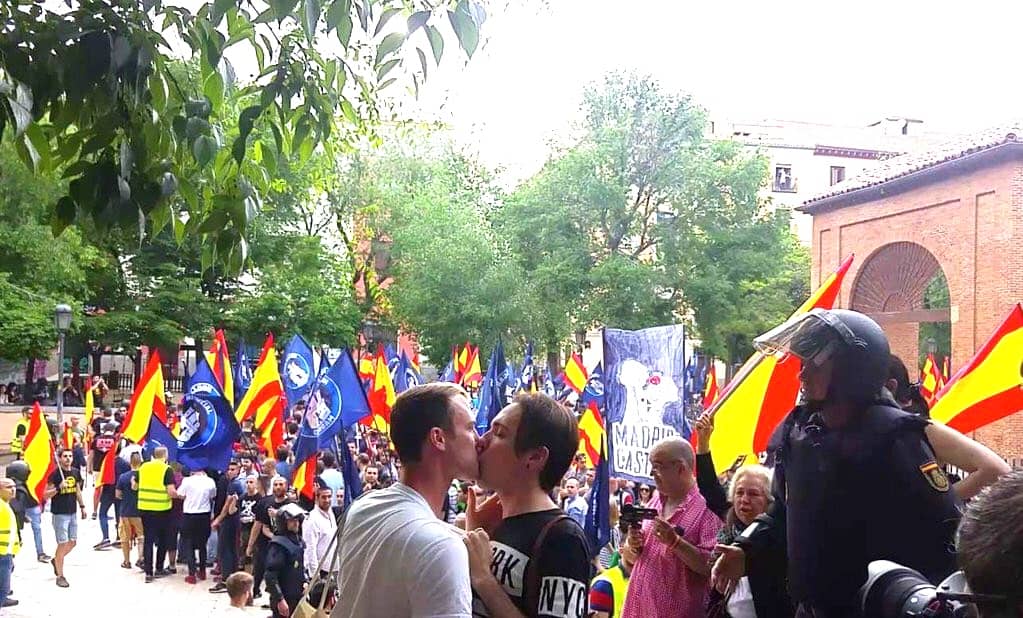 A group of neo-Nazi protestors from far-right group Hogar Social Madrid were demonstrating in Madrid on Friday and a gay couple stood up them with a long romantic kiss. Photos and videos of the kiss have since gone viral.

David Fernández and Gregor Eistert were just out for a Saturday stroll when they stumbled upon the demo.

“We completely forgot the demonstration was taking place and just like any other Saturday we were looking for a terrace in the centre of Madrid when we stumbled across a huge political rally,” Fernández told El Español.

The angry crowd started shouting homophobic abuse at the couple, such as “maricón!” (a derogatory Spanish word for a gay man similar to faggot) “You’ve got AIDS!” and “sickos” as they walked hand in hand.

So they reacted in the best way they could think of, a way that was bound to rile the crowd even more: they began kissing.

Said Fernandez: “It was completely spontaneous, it came from anger.”

The police removed the gay couple from the square, likely for fear of their safety.

Video of the kiss:

Previous Post: « Arkansas News Reporter Responds to Viewer Who Tells Him ‘I Can’t Stand Your Gayness’
Next Post: Watch This Bizarre Music Video Christians Have Launched Against Target’s Transgender Policy »