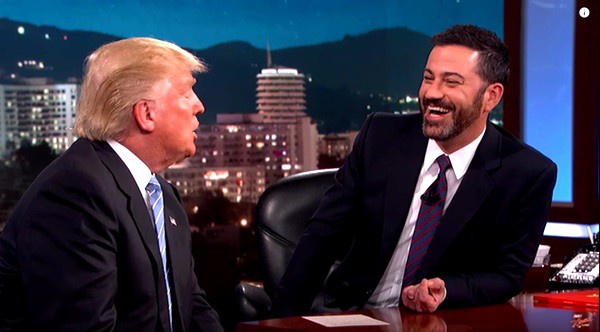 Donald Trump appeared on Jimmy Kimmel Live last night and Kimmel tried desperately to get him to commit to a personal answer on the transgender bathroom issue but Trump wouldn’t budge, repeating the refrain “let the states decide.”

Here’s how it went down. Folks (including Kimmel) actually laughed at his inability to give a real answer:

Kimmel: If you were voting personally as a member in New York state that you would vote for that right?

Trump: Well the party generally believes that whatever you’re born that’s the bathroom you use.

Kimmel: But what about you?

Trump: Me? I say let the state’s decide.

Kimmel: Do you personally support it? I think you do.

Trump: What I support is let the states decide and I think the states will do, hopefully, the right thing.

Kimmel: And what’s the right thing?

Kimmel: It’s the stupidest thing to be focused on.

Trump: The world is blowing apart. Lots of bad things are happening. You know what? It’s something that has to be discussed, but I say, let the states decide.

Kimmel: Alright, I’ll give you an N/A on that one.

Trump seemed to have a pretty strong opinion, however, on April 21 when he was asked about the issue on Good Morning America and said, when asked about HB2:

Since he has become the presumptive nominee however, his efforts to court conservative Republicans and the GOP establishment appear to have moved him into ‘know nothing’ mode.

In recent days he has said transgender people must be protected but that he would rescind Obama’s directive to schools on transgender bathrooms. He also said he’s against the “expensive” proposition of creating gender-neutral bathroom facilities.