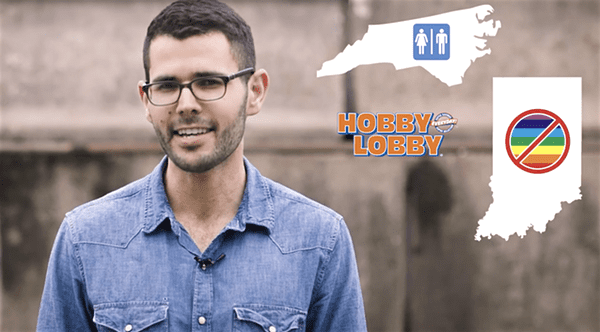 In a new video from Media Matters For America, Carlos Maza delves into the terrifying and homophobic group which likes to masquerade as a run-of-the-mill Christian legal group but in fact is a virulently anti-LGBT extremist organization that has been working for decades to subvert gay rights.

If you look closely at any number of recent anti-LGBT laws passed throughout the U.S., you can see ADF’s hand at work. Maza explains:

ADF often ghost writes these laws, and hands them over to state lawmakers, testifies on their behalf, and then defends them in state and national media.”

“ADF’s whole media shtick is that they’re just protecting Christians who just want to live out their faith freely. Pretty harmless right? But off camera, they’re basically monsters…ADF opposes hate crime laws, they oppose anti-bullying efforts, the think that gay kids are ‘trapped in homosexual behavior’ and need to be freed of their lives of sin. One ADF document warned that anti-bullying policies would ‘promote homosexual behavior to impressionable children.’”

RELATED: Alliance Defending Freedom Fights For Right To Turn Away Gays In US, But Aims To Put Them In Jail Overseas

And yet, representatives from ADF are invited on news shows and treated like anything but the radicals they are. As Maza puts its,

“[ADF are] extremists who have spent years trying to put gay people behind bars and deny women access to basic reproductive healthcare. That’s who ADF is. And that’s how news networks should identify them if they’re going to give the group air time.”