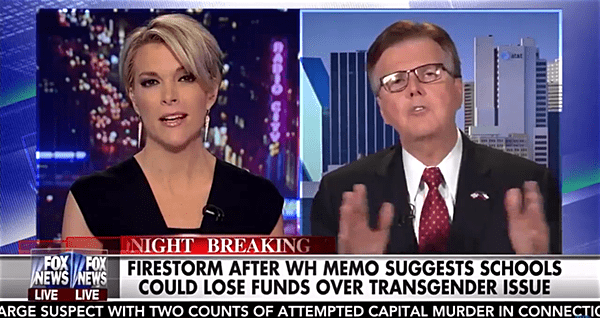 Throughout her interview, Kelly tried to steer Patrick towards answering her questions rather than just spouting off talking points based on lies and dangerous myths about alleged transgender bathroom predators. He repeatedly veered off course, but Kelly held his feet to the fire.

RELATED: Josh Earnest on TX Lt. Gov Dan Patrick: This Is ‘The Risk of Electing a Right-Wing Radio Host’ – WATCH

Patrick then attempted to mansplain, saying, “Megyn, you’re missing this.” But Megyn wasn’t having it. “I don’t think I’m missing anything,” she quipped.

When Patrick then suggested that granting transgender people equal rights would lead to predatory ‘men in women’s bathrooms’, Kelly interjected, “Do you have a big problem with that? Is this a problem? With men intentionally donning women’s clothing so they can sneak into–”

But as he did throughout the interview, Patrick then cut her off. The interview ended with Kelly finally cutting Patrick off from spewing more nonsense.

Previous Post: « Bill Maher: Don’t Blame Liberals for the Rise of Donald Trump – WATCH
Next Post: Ellen Made a Cameo in ‘Lemonade’ (and Called Becky with the Good Hair) – WATCH »